This Saturday is Free Comic Book Day, when comic book shops across North America and the world hand out thousands and thousands of free comics to anyone who wants one. Joe Field, owner of Flying Colors Comics, began circulating the idea back in 2001, and the following year, the event launched with the debut of the first Spider-Man film. There are now a generation of kids who’ve never known life without Free Comic Book Day, but there still doesn’t seem to be a lot of understanding among fans about how the event works at a retailer level. We chatted with Field about the business side of FCBD.

FreakSugar: FCBD is now over a decade old, so I presume the basic mechanics from the industry side have largely been worked out now, but can you talk a little about getting those sorted in the first couple of years. Obviously, there was a distribution system already in place, but how does getting FCBD books out differ from Diamond’s regular weekly shipments?

Joe Field: In the beginning, FCBD was just a few publishers and a handful of special edition comics, with a publisher or two also offering their back-stock comics. In 2014, more than 4.5 million comics have been ordered by some 2100 retailers, shipped by Diamond to more than 60 countries the world over. The logistical mechanics of that have been worked on by Diamond to the point where FCBD has become like the 53rd week of the year in terms of shipping. The FCBD comics are shipped (mostly) separately a couple of weeks before the event, so retailers then can have time to prep them for the first Saturday in May.

FS: How does the cost structure work? I know retailers have to pay for the books, but what does that cost actually reflect? Does that cover just the printing, or the printing and shipping, or…? Do both publishers and Diamond take a cut of that, or are they donating some or all of their services?

JF: The hope from the start was that costs would be shared by everyone along the comics’ marketing chain from the publishers to the printers to Diamond to retailers. Diamond builds into the cost of each FCBD comic a five cent fee that helps to fund the marketing of the promotion and defray some operational and shipping costs. It’s designed to be a system in which retailers, publishers and Diamond share the costs of bringing FCBD comics to the public. 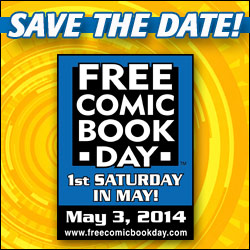 FS: The purpose of FCBD, from a retailer perspective, is to attract new fans to the medium, of course. I suspect that there’s no good way to track whether or not that’s effective, and you’re mostly working with anecdotal stories from fans who came into the fold thanks to FCBD. Am I right in that thinking, or do you have some actual metrics to follow?

JF: A bit of clarity: Free Comic Book Day is not only designed to bring in new readers, but also to call back former readers and then current readers. It serves all three purposes in one neat package.

I know FCBD has been effective in drawing new people in since we have kept track of our statistics from the beginning. In 2013, 12 years into FCBD, 20% of the people visiting Flying Colors Comics were making their very first visit to our shop. Every year we’ve heard the stories from new fans telling us that FCBD was their first toe in the water before they completely dove into the beautiful ocean of comics.

FS: Let’s say you’ve got someone who is turned on to comics because of FCBD. Do you have a sense of what type of money those types of fans spend, and how much their long-term purchasing it takes to offset a retailer’s FCBD expenditures?

JF: The analogy I will use here is those old breakfast cereal commercials that would show a bowl of Frosted Flakes along with the glass of orange juice, the two pieces of toast and the scrambled eggs as comprising a “nutritional breakfast for a growing body.” FCBD is part of a larger plan to keep comic book sales healthy and growing… along with strong creative content, other promotions, the spillover effect from other media, and the many other promotions retailers are involved with each year, etc.

The diverse nature of fans means there are a variety of ways they will spend in comic shops. There are the core buyers who visit their local comic shops for a fresh stack of comics every week — and we’ve developed a good number of those as a result of FCBD. There are also those who are more occasional buyers. At Flying Colors, we do a good job of communicating with those who may just come in for every new issue of Saga, or every new Walking Dead trade paperback, or every new issue of Buffy the Vampire Slayer, as examples. If someone wants to follow just one title, we will make special arrangements to take care of them.

FS: I recall some initial hesitation on the part of at least some retailers in the first years of FCBD, saying it was just a waste of money. Do you find that there are still hold-outs, or is retailer participation pretty much at 100% these days?

JF: The numbers are a bit hard to pin down, but suffice it to say that every brick and mortar retailer that does a good business in new comics is a better-than-90% bet to also be a participating FCBD store. There have been times in the past where there was brushback from a few retailers, like “why do I need to buy comics to give away? I’ve got plenty of unsold comics I can give away!” Those are the retailers not known for planning for the future…

FS: In a similar vein, do you know what the breakdown might be of retailers who participate at a pretty cursory level compared to those who really make it a big event with signings and costume contests and whatnot? I’ve gotten the impression that the more a retailer puts into FCBD, the more they get out of it — has that been your experience as well?

JF: I’ve been impressed by how most retailers have embraced Free Comic Book Day as the closest thing to a worldwide holiday for comics. I can safely say that in its 13th year, more retailers than ever are doing what they can to make FCBD a memorable day that will lead to more bright days ahead for comic book fans and retailers. Take a quick look at the FreeComicBookDay.com website for a look at how many stores have posted their special event info for FCBD. There’s a long list of cool events happening on May 3rd!

One of the things I’d love to do but will have to wait until after I retire (so, never) is to visit other stores on FCBD. As much fun as that would be, though, it will pale in comparison to the fun I’ll have greeting all the people coming to Flying Colors for FCBD.