DC Comics has been on a roll the past few months with their Hanna-Barbera revival, bringing classic cartoons to the four-colored comic pages, adding different twists along the way. Writer Mark Russell and artist Steve Pugh have brought their own unique spin on the modern Stone Age family with The Flintstones #1, on sale now, keeping the spirit of the cartoon while adding in some more modern sensibilities.

Mr. Russell spoke with me recently about how he became involved with the comic, how he approached the reboot, and capturing the magic of the original Flintstones cartoon.

FreakSugar: How did your involvement with The Flintstones reboot come about?

Mark Russell: DC approached me to see if it was something I might be interested and when I pitched it to them as a satire on contemporary society as presented through the prism of prehistoric Bedrock, they seemed to really like the idea. Plus, I think they liked how I wanted to update the sort of businesses that would make up the town, e.g. the Tarpit big box store, the Spears and Roebuck department store. They even let me give Bedrock its first gay bar, Homo Erectus. 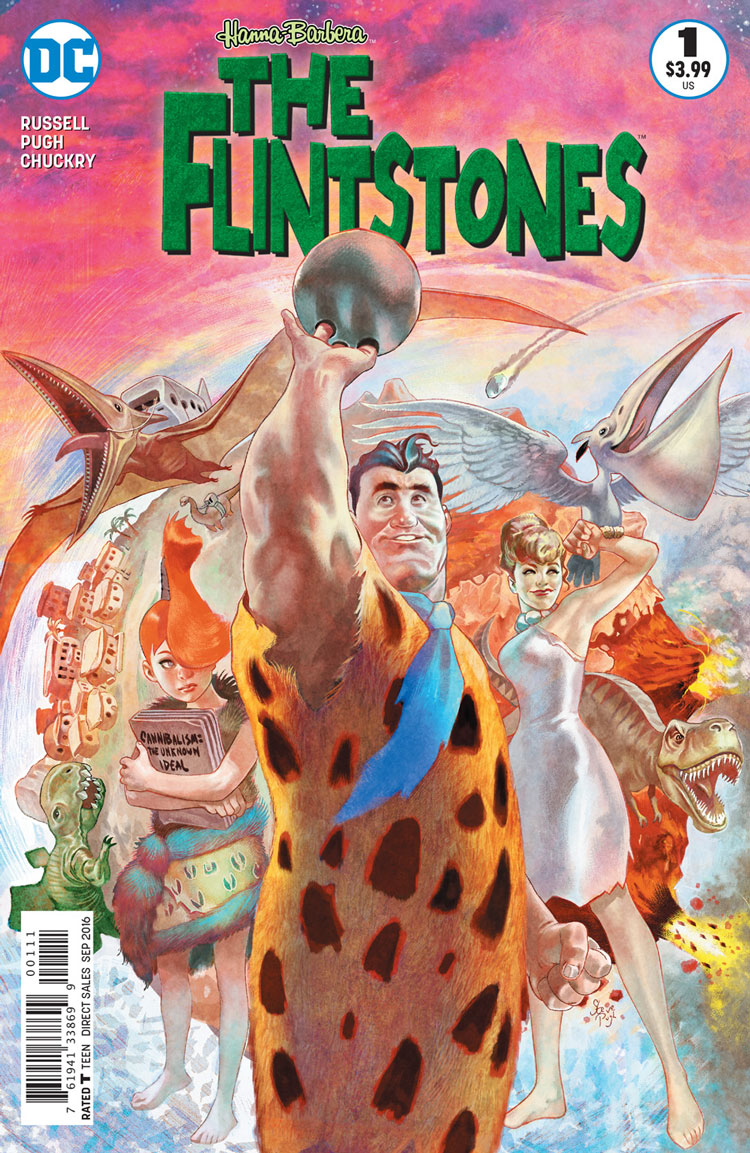 FS: If you had to pitch this reboot to readers, how would you draw in folks considering picking up the first issue?

MR: I try to recapture what I considered to be the magic the original Flintstones—the creative word-building of Bedrock and the acerbic animal appliances, but I try to use it as a platform for more than broad humor and edgeless gags. The original Flintstones cartoons were in many ways just The Honeymooners without the implication of domestic violence. So obviously that needed some updating.

FS: Readers have an idea of what they think they know about Fred, Barney, and the crew when you mention the classic series and its various spinoffs. What was your initial entry point into the cartoon?

MR: Vitamin pills, probably. It’s amazing when you look back on it how horrible those things were. They basically tasted like old batteries, but you ate them because they were shaped like Dino. It’s a testament to the power cartoon images have in our collective imagination, when you think about it. 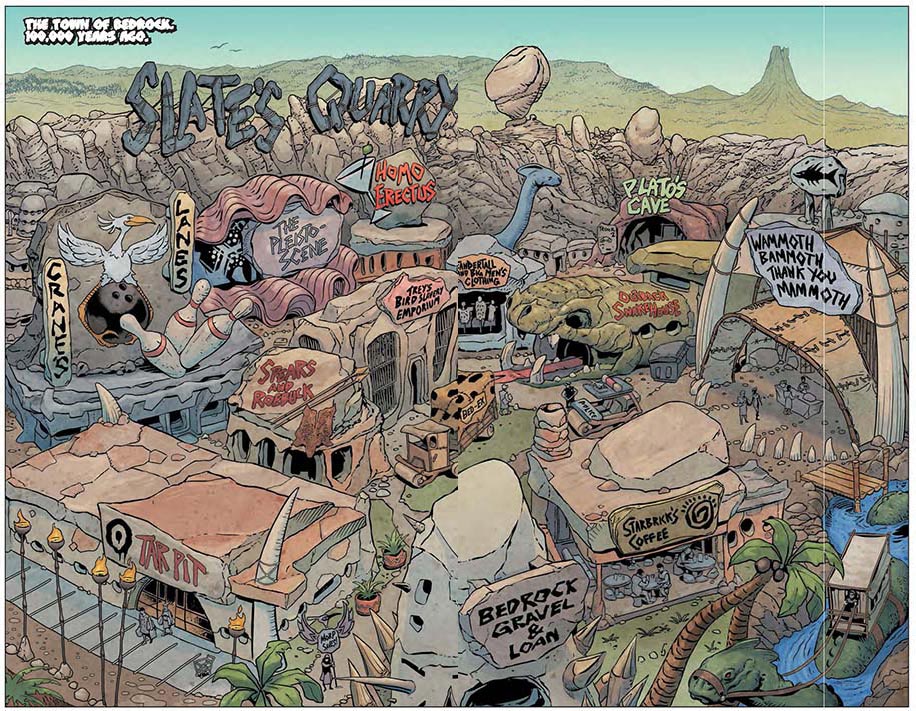 FS: You’re known for your irreverent yet thought-provoking work, as seen in Apocrypha Now, for example. There were times, especially in the early episodes of The Flintstones, when the humor was downright subversive. Is that part of the reason you considered the comic series a good fit for your sensibilities?

MR: Not really. By the time I saw any Flintstones cartoons, they were already twenty years old so any of the original social importance of the cartoon was lost on me as a young viewer. If there is one thing that I today find darkly subversive about The Flintstones, it’s the embedded commentary on consumerism. If you want a Polaroid camera, then there’s a tiny bird with a chisel that has to live inside that camera, but somehow, there’s never any question about whether or not subjecting that bird to a life of hellish slavery inside a camera is worth it. We are no less blithe when it comes to our seafood and iPhones.

FS: How did you and series artist Steve Pugh decide what you wanted the look of the book to be? How did that decision ultimately affect how you told your story?

MR: Steve is almost entirely responsible for the look. My big contribution was in the character notes. I wanted Mr. Slate to look like a modern CEO who thinks he’s a god among men. I wanted Fred to look like an aging veteran. I didn’t want this King of Queens thing where you have a couple of slobs inexplicably married to gorgeous women. I wanted everyone to look sort of the way I conceive of people—basically attractive but with their sadness, joy, and ambition subtly incorporated into their appearance.

FS: At times, the characters in the original series felt one-dimensional. Did you have any type of manifesto you wanted to advance in terms of fleshing Wilma, Fred, and the gang when you began this project?

MR: I just wanted to write about them as human beings dealing with the opportunities and dangers of this new thing called civilization.

FS: What can we expect moving forward in The Flintstones #1?

MR: The Flintstones #1 introduces a lot of what the series is about. Once the initial excitement of having stone houses and being able to eat at The Outback Snakehouse wears off, Fred is left imprisoned in a dead-end job. Wilma is an intelligent and thoughtful woman who struggles to be taken seriously. Bedrock is a wonderful omelet, but it required the breaking of a lot of eggs. Eggs that haunt Fred and Barney and the other people who created the world’s first civilization.

The Flintstones #1, written by Mark Russell with Steve Pugh on art, is on sale now from DC Comics.

From the official issue description of The Flintstones #1:

Welcome to Bedrock, where Paleolithic humans head to dinner for a taste of artisanal mammoth after shopping at Neandertall & Big Men’s Clothing, where Wilma shows her modern art, and where, if you take a plane, you could literally end up sitting ON the tail section. Join Fred and Barney as Mister Slate sends them on a mission to show some Neanderthals a night on the town in hopes of luring them into this new system called “working for a living.” In Slate’s Quarry, of course. Is Fred’s ship about to come in? Find out when the gang finishes out the evening at the employee hot tub party, where they learn how the one percent lives here in Bedrock, home to the world’s first civilization and the modern stone-age family—The Flintstones. Don’t miss this extra-sized debut issue!