“With Doctor Fate Vol. 1: The Blood Price, Paul Levitz and Sonny Liew have given readers a story that touches on issues of insecurities, heritage, and horror in a manner that creates a whole host of story possibilities moving forward.”

I hate magic. Or, I should say, the execution of magic in storytelling.

Here’s the thing: In so many representations of the use of magic in pop culture, many writers set an extraordinarily low bar for newly minted warlocks and wizards to learn the craft of their newly chosen paths. This is particularly the case in cinema, in which viewers are often given some sort of lip service to the difficulties of a young woman or man fumbling around using spells and wielding totems and other magical items to sometimes comedic effect. After a prolonged montage of some gruff old wizard teaching the hero the ropes, our protagonist usually scrambles around to save the day at the last minute. And when we next see our hero in the chapter of his story, he’s pretty adept at his craft, give or take a few hiccups.

That’s not to say I don’t enjoy reading tales of folks who walk the magical wild side, but I usually gravitate toward stories of DC Comics’ John Constantine or Marvel’s Doctor Strange, magicians who’ve pretty much perfected their trade and don’t require me to add the extra layer of disbelief that a newbie can be a first-class warlock in three issues.

For readers not in the know, The Greatest American Hero was a dramedy from the early 1980s, telling the tale of Ralph Hanley, a man who was given a suit by aliens that granted him superpowers. However, he lost the instructions and, for the duration of the series, had to feel his way around using the suit, learning the ropes on his own. 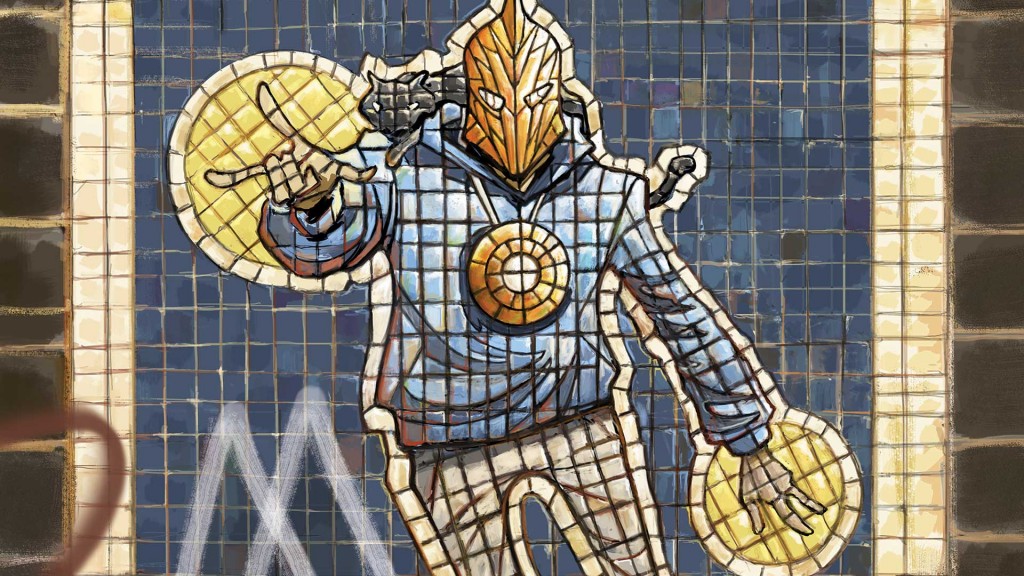 In Doctor Fate Vol. 1: The Blood Price, collecting issues 1-7 of his and artist Sonny Liew’s series, Levitz has taken that notion of learning through trial and error and applied it to how he approaches writing DC Comics’ series following the latest incarnation of the company’s Doctor Fate character. True, Khalid Nassour, the Egyptian-American med student who would be the new Doctor Fate, isn’t show bumbling about like the red-suited hero of GAH. However, when he is bestowed the helmet of Fate by Nabu the Wise to be his avatar, Khalid doesn’t have any more instructions than Ralph did during GAH’s first episode. And, like Ralph, Khalid doesn’t become adept at one, two, five chapters into his story. There’s something very satisfying to seeing a young man struggle like I would like to think I would at being granted abilities beyond my experience of the world.

In many ways, Levitz has finally given us a Spider-Man for the magical set. That conceit of using inexperience in derring-do as a metaphor for finding one’s place in the world is always ripe with story potential, so much so that it almost seems backwards and wrongheaded that it hasn’t been applied to the comic book magical set more often than how Levitz employs it. However, he applies another layer to that storytelling framework that isn’t often utilized but works beautifully with Doctor Fate: addressing race and ethnicity. 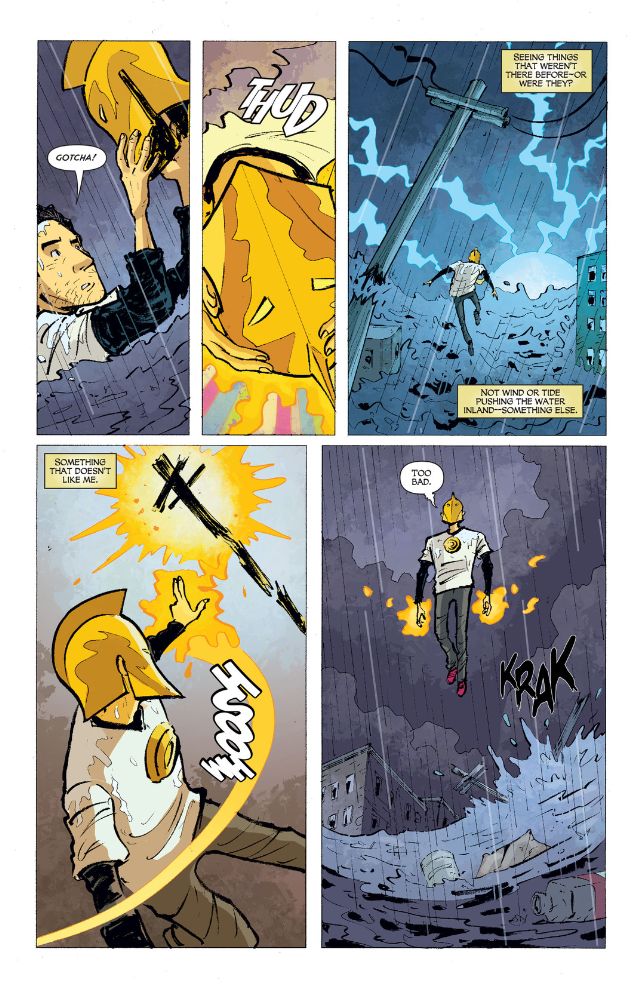 The idea of Doctor Fate has always been tied to north African and Middle Eastern mythology, to such an extent that once it was announced the nationality of the new Doctor Fate was announced ahead of the first issue of the series, I was in awe of how much it made sense. Khalid’s Egyptian heritage ties him to the Doctor Fate mythology in such a manner that no previous doctor had been connected before. More than that, however, it gives Levitz more storytelling opportunities to reveal that push-pull of being a first-born American to a Muslim father and Catholic mother, neither being religious themselves. Khalid’s experience with the helm of Fate gives him the chance to explore his Egyptian heritage in a way that Levitz alludes the young man may not have had the opportunity to do otherwise.

But Levitz is smart in that he doesn’t suggest that learning about the past reveals only pleasantness and welcome revelation. Anubis, the Egyptian god of the dead reborn in modern-day Brooklyn, is Khalid’s chief antagonist, as the dog-faced deity wishes to cleanse the world of humanity in a new great flood. As much as Anubis represents a part of Khalid’s Egyptian heritage, however, the god also represents the idea that our past—however disdainful it can sometimes be—is part of who we are. We’re not bound by it, though, and can choose to acknowledge it, learn from it, and grow in ways of our choosing. The fact that Khalid is in that middle ground where the past, present, and future are in flux adds to that process and, in turn, enriches the story. 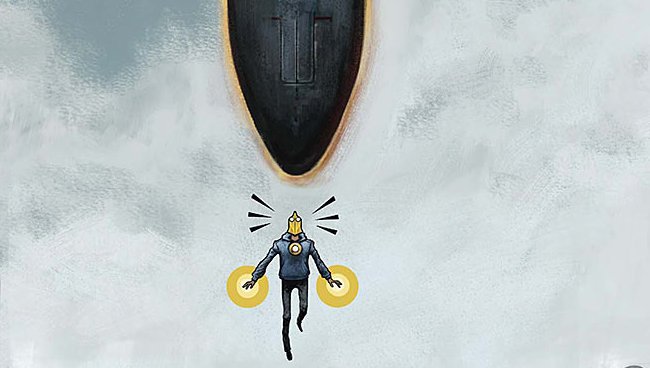 Still, this coming-of-age magician story wouldn’t work without Sonny Liew’s hand guiding the book’s pencils. Frankly, the forms and characters that Liew presents on the page are awkward to behold, and I mean that nicest sense possible. The gangly form of Khalid is alternately appropriately gawky and, when donning the helm of Fate, disturbingly creepy. But that’s how I want my sorcerers and conjurers—although Doctor Fate exists in a superhero world and is a do-gooder in his own right, he’s not a superhero. There’s always been a disconnect for me seeing previous incarnations of Fate as barrel-chested and broad-shouldered specimens standing next to the likes of Superman and the Flash. With a costume change, many of the characters would be indistinguishable from one another.

And that awkwardness is reflected in Khalid’s personality, his tentativeness and uncertainty in his new role as Doctor Fate. It was a smart design choice by Liew, and the artist’s insight carries forward in his designs of everything from the twisted forms of Anubis to walls of the pyramids. Doctor Fate feels like a weird intersection of superhero funny book, magical fantasy, and eye-squinting horror in all of the best ways. 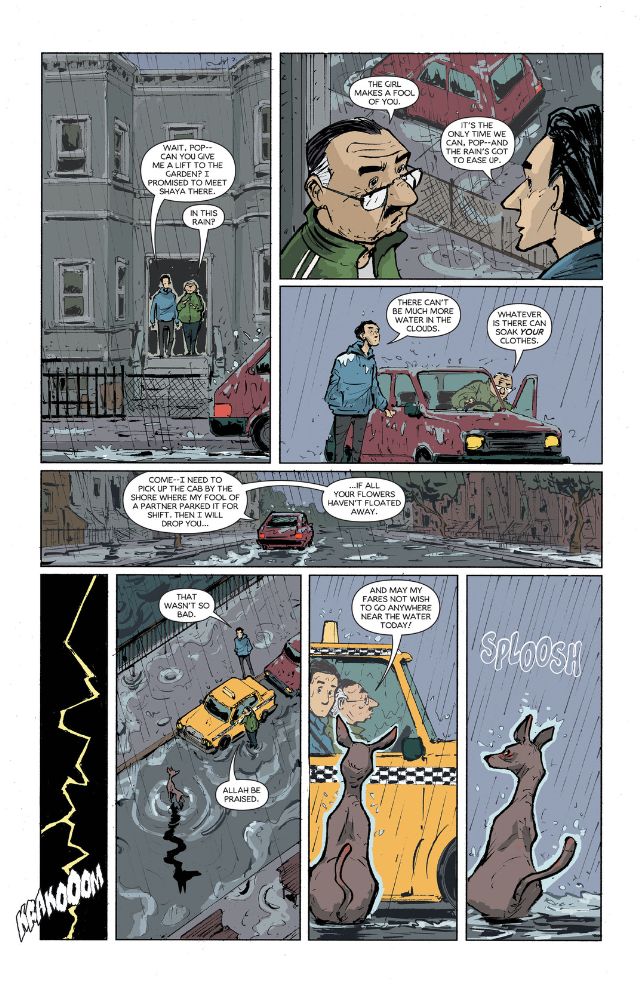 With Doctor Fate Vol. 1: The Blood Price, Paul Levitz and Sonny Liew have given readers a story that touches on issues of insecurities, heritage, and horror in a manner that creates a whole host of story possibilities moving forward. While I am not certain of the series’ fate (unintentional pun, but I’m leaving it in) post-DC’s “Rebirth” event, I’m on the hook to see what Nabu’s newest avatar will do next.

Doctor Fate Vol.1: The Blood Price, written by Paul Levitz with Sonny Liew on art, is on sale now from DC Comics.