When we first meet Grand Moff Tarkin, commander of the Death Star, in Star Wars: A New Hope, it’s clear that Darth Vader has a respect for the Imperial officer—whether by virtue of Tarkin’s position or from their past together, though, it’s unknown. However, if the Grand Moff fears the Sith Lord and his power, he does not let his demeanor belie that fear. While we don’t get the chance to see the two interact that much in A New Hope—Tarkin perished with the destruction of the Death Star—the team behind this week’s Star Wars: Darth Vader #18 gives us a peek behind the curtain of their relationship, as well as what makes both men tick. 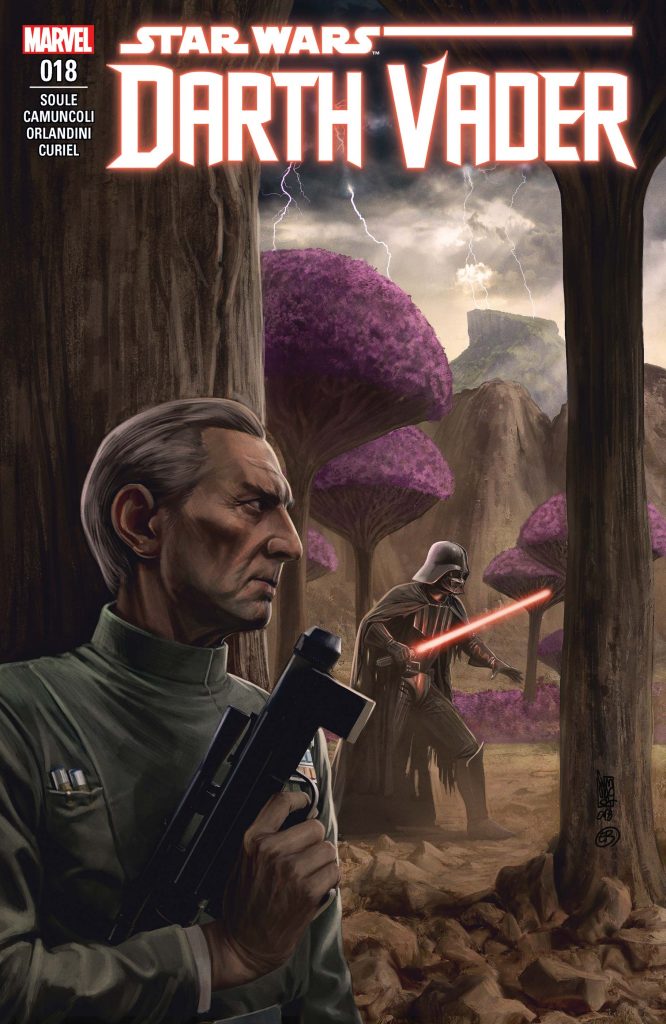 At the open of #18, we find then-Governor Tarkin with a band of soldiers parked at a campsite on Chandar’s Folly in the Outer Rim, looking slightly weary for their troubles. Those troubles, as it turns out, focus on their hunt, which is going less-than-ideally. This is no surprise, considering their prey is the former Anakin Skywalker himself, Darth Vader. While Tarkin and his forces have had some successes—chief among them taking Vader’s lightsaber, a feat in and of itself—the Governor is hemorrhaging fodder to throw at Vader, despite using studying the Dark Lord’s body language and methods to use as weapons against him. If either is to claim victory, however, they each will have to tamp down their worse impulses and use their enemy’s weaknesses to halt the other. 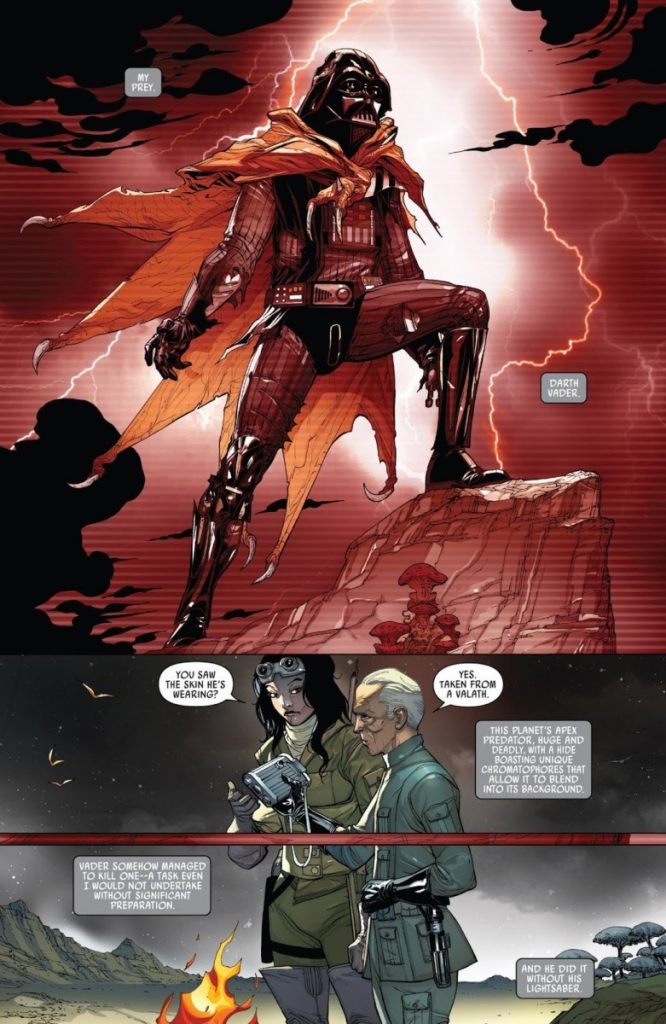 As this is set in the past, we know that Tarkin and Vader survive the back-and-forth. Even the why—while important—takes less of a spotlight than what the battle of wills reveals about each contender. (Although the why is fitting and is a pitch-perfect explanation of why they would engage one another in this game.) Tarkin is willing to throw soldiers at the Dark Lord to their doom if it means that he’ll garners some insight into how to fell Vader, while Vader is a force of nature that refuses to stop—a juggernaut of the Force. This early version of the Sith Lord has not yet learned to quell his overflowing anger, unlike the relatively measured menace we first meet in Episode IV. Writer Charles Soule presents a Vader here who is more willing to taunt and tease his opponents, whether it means hiding himself in plain sight using the Force or wearing the skin of the planet’s apex predator to make a point. While his subordinates are unnerved, Tarkin doesn’t blink, but seems rather impressed by Vader’s display of power. 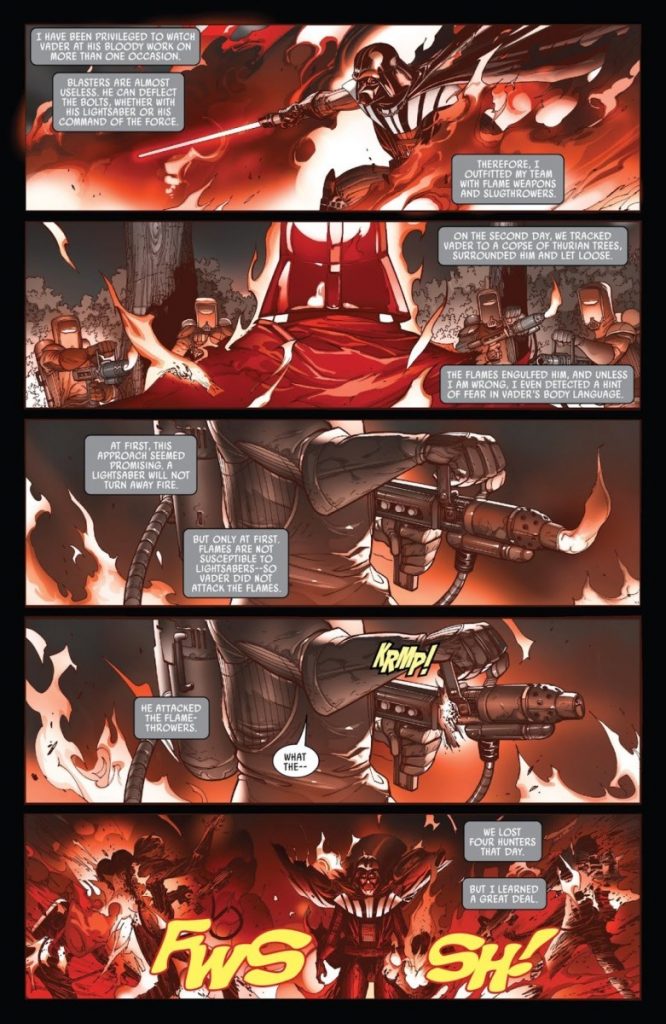 However, whether Tarkin himself is anxious at this demonstration, artists Giuseppe Camuncoli and Daniele Orlandini make sure readers are reminded not just of the power Vader carries, but the terror he exudes. The image of the Dark Lord wearing the predator’s skin as a cape is foreboding, but Camuncoli and Orlandini’s the silhouette of Vader just standing there as men and women throw themselves at him to their doom is terrifying. The physicality that Darth Vader uses in battle in this issue is impressive; it’s evocative of the final scene of Rogue One, during which the Sith Lord cuts through Rebel soldiers like wheat in a field. However, Camuncoli and Orlandini’s silent and stationary Darth Vader is still more terrifying, the Empire’s apex predator who, while churning with anger, doesn’t need to move to wield that anger or power. Weapons exploding and consuming their users, swathed in colors by David Curiel, elicits the idea of the Hell that awaits anyone who would step in Vader’s path. This calmness is mirrored by the white-on-gray lettering choice Joe Caramagna chooses to use for Tarkin’s inner monologue, bringing to mind a military mind who, even in the face of a Sith Lord, keeps his composure—or works very hard to do so, at any rate. Tarkin and Vader may be more alike than either suspects. 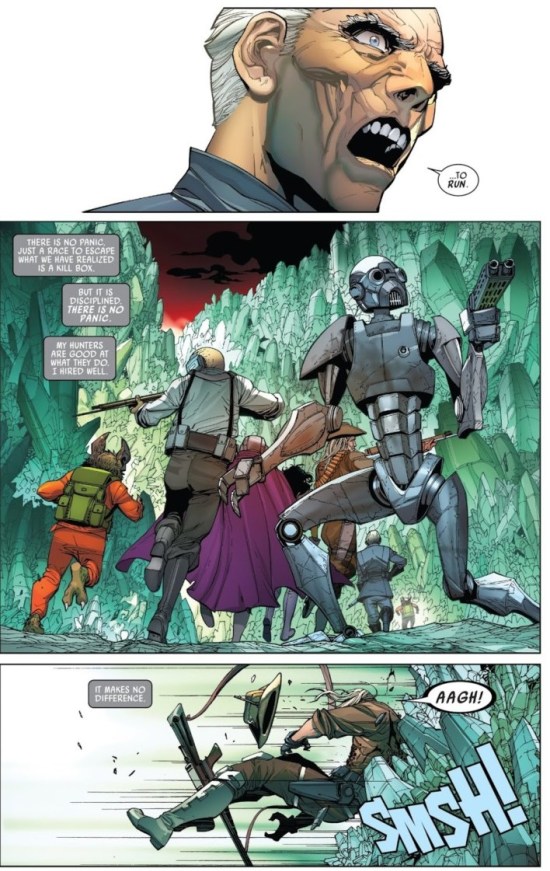 Star Wars: Darth Vader #18 is one of the most engaging and enlightening Star Wars tales in the franchise’s four-decade history. Since their first issue of the relaunch, Charles Soule and the entire creative team consistently bring nuance and depth to the character of Vader in a way that’s both surprising and rewarding, demonstrating that there are plenty of layers to the Dark Lord of the Sith—and his allies and enemies—to be explored.

It is time for GRAND MOFF TARKIN to repay a long-standing debt to DARTH VADER…and settling what is owed will require every last bit of his cunning, and will cost more than he ever imagined.

STAR WARS: DARTH VADER #18 Sheds Light on the Vader/Tarkin Relationship
Star Wars: Darth Vader #18 is one of the most engaging and enlightening Star Wars tales in the franchise’s four-decade history. Since their first issue of the relaunch, Charles Soule and the entire creative team consistently bring nuance and depth to the character of Vader in a way that’s both surprising and rewarding, demonstrating that there are plenty of layers to the Dark Lord of the Sith—and his allies and enemies—to be explored.
10Overall Score
Reader Rating: (0 Votes)
0.0