Pietro Maximoff, the super-fast superhero and sometimes-Avenger known as Quicksilver, is often misunderstood by both his fellow heroes and readers of his comic book exploits. While he has noble qualities—saving people, fiercely defending his family and loved ones—folks can sometimes be put off by what can be perceived as aloofness and arrogance.

But is that who Pietro is at his core? What drives the man who has twisted and pulled and manipulated for so much of his life? Those are the questions that drive writer Saladin Ahmed (Black Bolt, Exiles, Abbott) in his new miniseries Quicksilver: No Surrender, on sale now from Marvel Comics. Spinning out of the events of the recent Avengers: No Surrender story arc, Ahmed follows the speedster after he’s just assisted in saving the world from extra-worldly forces and possible destruction. However, as a result, he finds himself unstuck in time, facing a whole new set of foes that would do the Earth harm. In the process, we get a glimpse into what drives Quicksilver: his wants, his fears, and his motivations in navigating the world.

I spoke with Mr. Ahmed recently about those very matters, as well as his upbringing and relationship with his sister Wanda—the Scarlet Witch—shapes who he is. 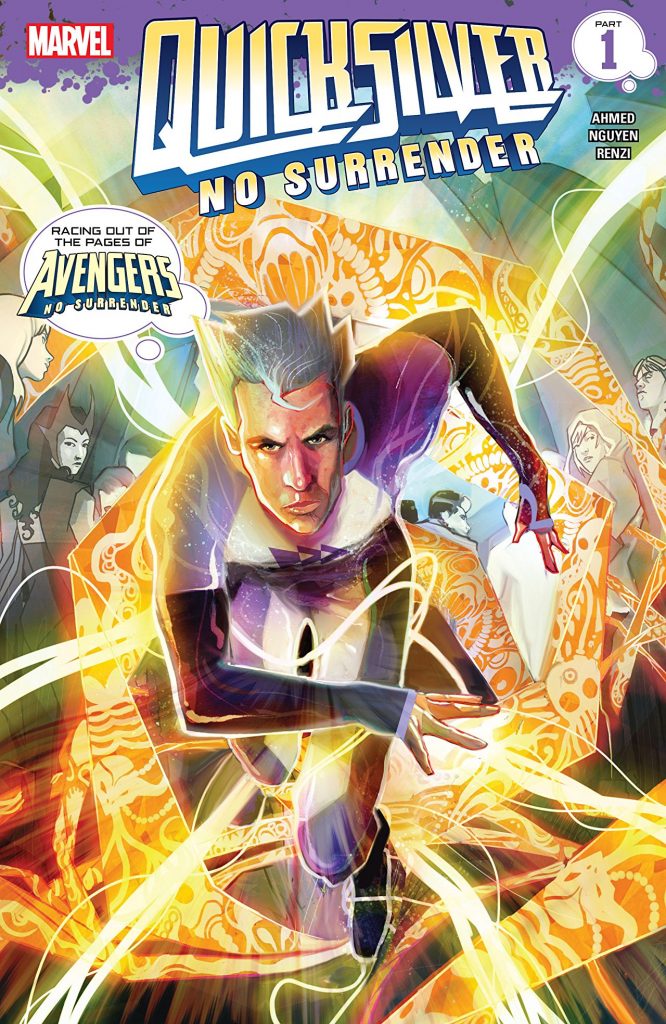 [Editor’s note: This interview took place prior to the release of Quicksilver: No Surrender #3.]

FreakSugar: Where do we find Pietro at the beginning of Quicksilver: No Surrender?

Saladin Ahmed: Nominally, the miniseries is a follow-up on Avengers: No Surrender. When we last saw Pietro, there was a big threat where two super-powered entities turned Earth into a game board. More to the point, most of Earth’s heroes have been incapacitated by this strange object that’s whizzing around, too fast for almost anyone to see. Pietro finds this thing, destroys it, and frees most of Earth’s heroes and, through an assist, saves the world. However, he disappears. The rest of the Avengers don’t know what happened to him.

That’s all sort of background for the Quicksilver miniseries. However, it links up nicely but isn’t necessary to know what’s going on. The miniseries is a closed, locked room story about Pietro. It’s him in Cast Away. [laughs] He’s on his own in a sort of in-between reality. There’s a sort of survival/horror element to it as we see these creatures around him.

But it’s really a deep-dive into the character. Pietro is loathed by some, loved by a small, dedicated few. It’s been a while since he’s gotten the deep-dive he deserves into his way of looking into the world and how it got that way. We’ve got five issues to do that. As I said, we have a cool horror plot with monsters, which I hope is really exciting, but it’s there with the character stuff, which is really what the miniseries is about. 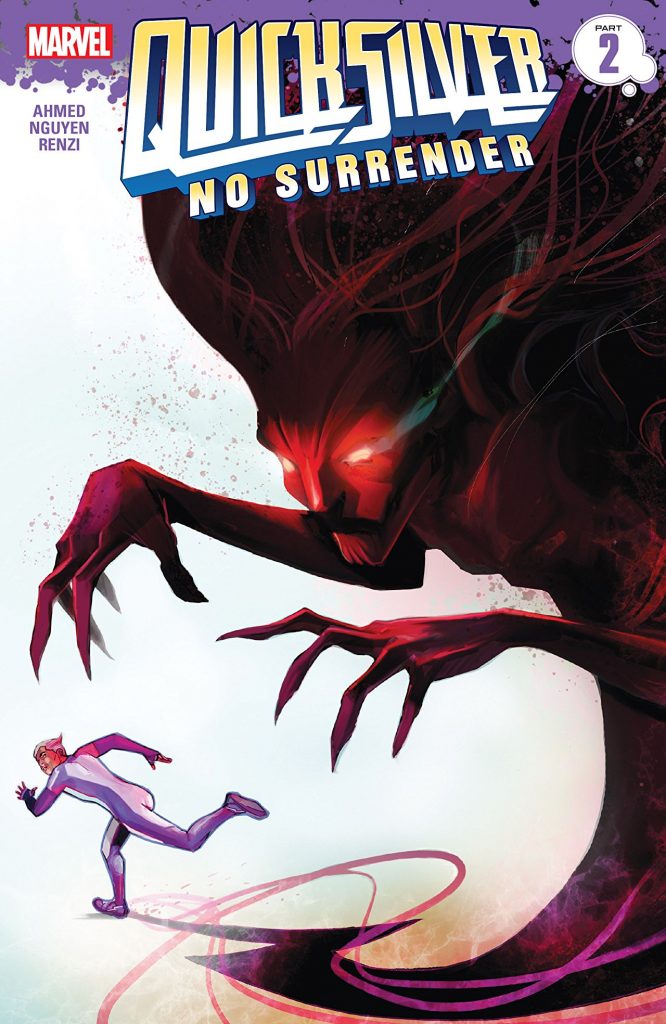 FS: I’ve always enjoyed the character, but, as you said, he’s been loathed. With the House of M and Son of M miniseries, he was cast as a villain, so it’s nice to see a deep-dive of the character.

SA: My touchstone was an issue of writer Peter David’s X-Factor way back when, when Doc Samson is psychoanalyzing the X-Factor team. My take is different than Peter’s, but it’s indebted to his. His take on Pietro was impatience: that if you lived at super-speed, everything around you be frustrating and you would be a jerk, too.

There’s an element of that in how I’m writing Pietro. But really, for me, the better answer is about anxiety, which I suffer from myself. When I started thinking about Pietro as someone who’s always racing, gripping his fists because a force inside him is moving at the speed of light and it feels like it’s driving him a little crazy—there are a lot of people who can relate to that. So I kinda tapped into that.

For me, the other way into the character, which is always important to me, is where does he come from in the world? The demographic questions: who were his parents? What kind of standard of living did he have? How were they treated? For me, one of the great neglected things in the Maximoff and Doom and other wings of the Marvel Universe is the Romani stuff. I don’t know enough about that culture and that world that I didn’t think I could do a full treatment of it, but just to kind of dig into that question a bit, I felt like it gave me insight into Quicksilver’s character. 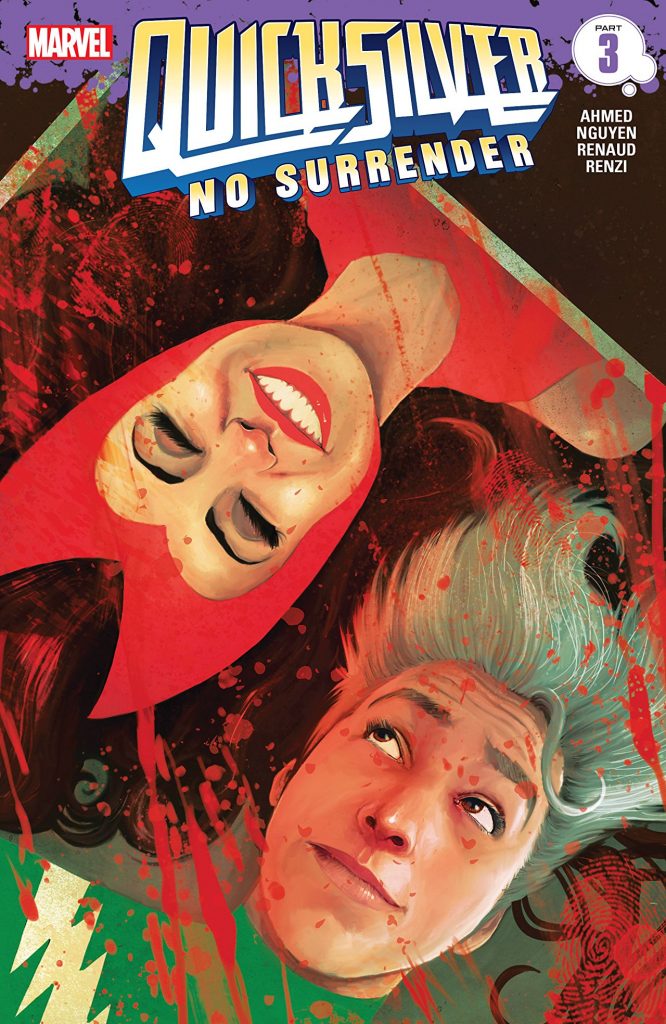 FS: He and his sister Wanda have had a very complicated relationship over the years and it looks like you delved into that in issue #3. What is your throughway into that sibling relationship that they have?

SA: It’s interesting because I am a father of boy-girl twins. They’re nine. It’s been really fascinating to see what it means for two people to have been together that much. It’s a bond. Fantasy and science fiction and mythology turns it into a magical bond. I don’t know if it’s that, but it’s a fascinating bond.

Starting out into the world as twins together, despite all of their back and forth tumultuousness, Pietro and Wanda have always been who the other has weathered everything with. It’s family. It’s a kind of tightness of family along with the fractures that I don’t think we get enough of in superhero comics. We go deep into that with issue #3. Artist Paul Renaud did some really amazing art for the flashback sequences. We’ve all put a lot of work into this book and people who are into Pietro or Wanda or family will really dig this book. I hope fans of the characters will read this book for a while.

Quicksilver makes a desperate final stand against a nightmare of his own making. But this time, no surrender might mean no survival…