With Deadpool, Marvel’s favorite Merc with a Mouth, finally settling down and marrying in this week’s Deadpool #27, we decided to bring you the best superhero-­themed wedding bands and engagement rings the Interwebs has to offer.

Whenever I think of “joining two lives as one,” of course I think of a loner like the cheeriest of cheeries, the Batman. This custom­-made wedding band, which comes in gold or sterling silver, says to your husband or wife, “I’ll never treat you like a sidekick, but I might have anger-management issues and need alone time in my man­ or woman­-cave.” The ring can be forged with stones of your choosing, such as black diamonds– diamonds as black as your partner’s world before meeting you. When wearing your Batman wedding band, it’ll help remind you to leave the past in the past, so you can stop worrying about those folks you indirectly killed by letting a Shriner’s clown reject live another day. 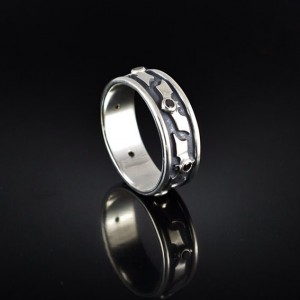 Whether marrying your partner or pledging your life to an intergalactic police force, life is full of commitments. Why not shoot for the stars and propose to your lover with this Green Lantern engagement ring? The green crystal will remind your fiancée that there is hope in even the darkest of nights, and make her sigh heavily as you watch Ryan Reynolds in Green Lantern for the hundredth time that she took an oath to be with you. It will also serve as inspiration to her not to slice off your nethers in your sleep for spending the mortgage payment on that four-­foot tall statue of Sinestro. 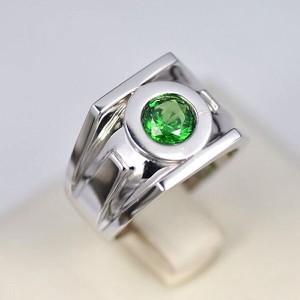 If you’re like me, you usually have wads of mad dolla’ bills just lying around the house, just waiting to be spent on your heart’s desire? Where did I get those mad dolla’ bills? Just never you mind, that’s where. So, if you do have cash to burn and a lady to woo, you might want to pick up this Arc Reactor engagement ring, inspired by Tony Stark’s own arc reactor from the Iron Man comic books and films. The princess-cut diamonds and white gold band will let your intended know that you’ll treat her like your own Pepper Potts, without the years of stringing her along and constant disappointment. The arc reactor design will signal to your betrothed that she keeps your heart pumping, staving off the shrapnel of regret and second-guesses from your relationship. Pending a wandering eye or a wild alcohol-­fueled bender, this engagement ring will serve as a symbol to your fiancée that she can change you, she really can. 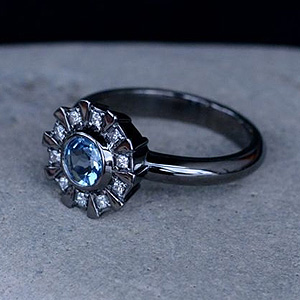 His and Hers Superman Concave Wedding Bands

Do you want to show your fiancée that your love is invincible, but you’re working with a reporter’s salary? Then look no further than the His and Hers Superman Concave Wedding Bands. The rings are made of tungsten carbide, giving a simple, elegant look, just like the first superhero himself. The symbol for the House of El is etched across the rings, acting as a symbol of hope that your love won’t go the way of Krypton and explode in everyone’s faces. As the metal fits snugly around your ring fingers like Doomsday’s hands around Clark Kent’s throat, your Superman wedding bands will serve as a reminder that “til death do us part” could be much worse. 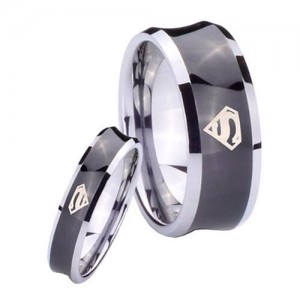 With Captain America: The Winter Soldier in theaters now, why not show your patriotism, love of comic books, and, oh yeah, devotion to your spouse with this Captain America silver pipe cut wedding ring? Just like Captain America himself, the ring is understated, bearing only a lasercut emblem of Cap’s shield in the ring’s center. The ring will let your best guy or favorite dame know that while he or she holds your love, you’ll dump them when duty to country calls, so suck it up, babe. I mean, really, you knew what you were signing up for. If Ultron starts laying waste to a small agrarian country for shits and giggles, I can’t stick around because we have dinner plans with the Davidsons. God in Heaven, don’t start the water works. Sigh. I didn’t mean it. I didn’t. I was tired and Iron Man made fun of my suit again and the new costume is sticking to my giggleberries. Don’t cry. Screw that country! What time are we heading to the Davidsons’ house? 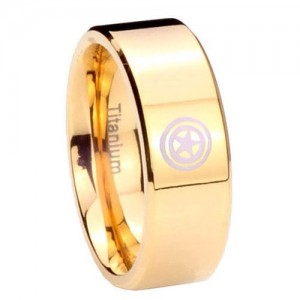