As a property that is entering its third decade, the Teenage Mutant Ninja Turtles brand and characters have been a cash cow for a whole host of companies wanting to profit from the fearsome foursome’s good looks. At the height of their popularity in the late 1980s to early 1990s, most any piece of merchandise bearing the Ninja Turtles’ likenesses was, on the whole, a sure path to easy money. However, not all of the TMNT products on the shelves were –*ach-hemm*– totally tubular. Many of them stank like so much sewer gas. With Michael Bay’s new spin on the franchise opening today in theaters nationwide, I take a look back at a few pieces of terrible TMNT merchandise that didn’t quite stick the backflip landing.

Ralston Cereals, maker of such breakfast delights as Bill & Ted’s Excellent Cereal and The Nintendo Cereal System (“It’s for breakfast now!”), knew that kids shop with their eyes, not with their brains, and that most parents would acquiesce to their children’s demands for morning meals branded with their favorite cartoon characters, lest– their crotch fruit throw a tantrum in the grocery store! Hence, the Teenage Mutant Ninja Turtles Cereal. I never had to show my ass and act a fool in public to try the cereal; Mom picked up a box one day to see if I wanted to try it out. Imagine marshmallows shaped like turtles (allegedly) and the Ninja Turtles’ weapons, only twice as dense as Lucky Charms’ horseshoes and rainbows. Sprinkle in some bits of cereal that look like Chex but have the taste of unprocessed wheat and you have the recipe for a breakfast that will make your teeth hurt for a month and turn you off the taste of milk for nearly as long. Upside: The box features the green do-gooders, with Donatello taking the lead, holding a spoon since it more closely resembles a bo staff than any of his teammates’ weapons. One of the few times Donnie gets top billing over his attention whore of a brother, Leonardo! 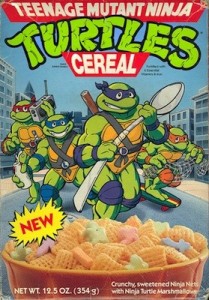 And if you actually enjoyed the hard-shelled heroes’ corporate branded cereal, you could always consume (I hesitate to use the word eat, as it suggests the cereal was actual food) the breakfast treat out of your very own Teenage Mutant Ninja Turtles cereal bowl. A bowl bearing the face of one of the Foot Clan-fighting brothers came with boxes of Teenage Mutant Ninja Turtles Cereal, Cookie Crisp, and other Ralston cereals for a limited time. Does anyone else find it a bit disturbing that the cereal is essentially poured into the Turtle’s hollowed-out body? Anyone? I feel like I just stumbled out of the set of Indiana Jones and the Temple of Doom. I guess April O’Neil can take the place of Kate Capshaw as useless maiden-in-distress. And the Turtle smiles on, his grin frozen in time, encased in plastic, an immortalized portrait of a damned soul. As Rust Cohle said in True Detective, “Death created time to grow the things it would kill.” I feel like the reptile was burdened with that knowledge somewhere down the line. But, hey, collect all four! [EDITOR’S NOTE: Hey, I loved having these bowls as a kid! Your words mean nothing to me, Jed. NOTHING!] 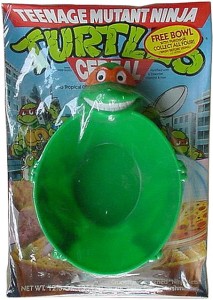 I suppose after feasting on a healthy breakfast of gum-ravaging goodness—which, by the way, tastes nothing like pizza—the next thing I would want to do is brush my teeth and attempt to scrub the shame of eating that cereal away. I don’t know about you, but I’ve always wondered, “Brushing my teeth is pretty cool, but could a singing base for the toothbrush improve my overall enjoyment?” The answer, of course, is a resounding, “Fuck yeah, but only if the base is shaped like a Ninja Turtle, sounds nothing like a Ninja Turtle, and sings an off-key version of the cartoon theme song.” Well, it’s your lucky day, Turtle-phile. The Teenage Mutant Ninja Turtles Talking Toothbrush has all of these attributes rolled up into one product that inexplicably existed and took up physical space. I don’t like to brag, but I once owned one of these Talking Toothbrushes. It’s true. My mother loved me. And if you’re one of the people out there who didn’t own a TMNT-licensed, cavity-fighting product, then I guess you didn’t pray enough as kid. My one complaint is that it seemed defective. For some reason, a nine-year-old kid couldn’t take it apart and then reassemble it in working order. Very weird. I call bullshit, Donatello! 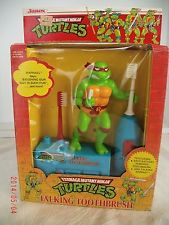 Because you want to be able to see in the dark while you edit your confession note for killing your dad after getting you such a terrible gift. Just remember, though: He just got out of jail and all he knows is that you like the Turtles. And the Dollar Store was on the way home. 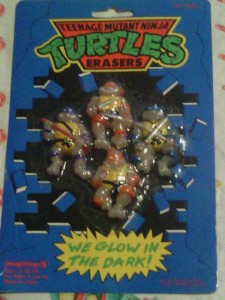 I imagine the marketing meeting beginning as such: “How can we appeal to both rabid TMNT fans and hoarding shut-ins?” “Trolls, Jefferson. Teenage Mutant Ninja Turtle Trolls!” Cross-branding synergy, lightning in a bottle! I remember looking at one of the Turtle Trolls on a department store shelf and thinking that even I wouldn’t want that stinking up my TMNT collection, and I owned the Talking Toothbrush. The only way I’d have that in my collection is if the Troll granted wishes. I’d wish for a better Ninja Turtles toy. Or probably cake. I was a chubby kid. 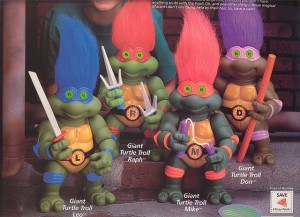