With the feature film Deadpool starring Ryan Reynolds hitting theaters this Friday, interest in the Marvel Comics Merc with a Mouth is reaching a fever pitch. Since his inception 25 years ago, a slew of creators have put their unique spin on the sometimes psychotic, always humorous antihero Wade Wilson, all with varying results and appealing to differently readers depending on their unique sensibilities. Some folks like their Deadpool stories with manic, nonstop madcap zaniness, with the mercenary breaking the fourth wall and all sorts of lunacy packed into each page. And that’s a perfectly valid preference, as the character certainly works that way to a great extent. The Ryan Reynolds vehicle seems to borrow in part, judging from the trailers, from that perspective on the character. 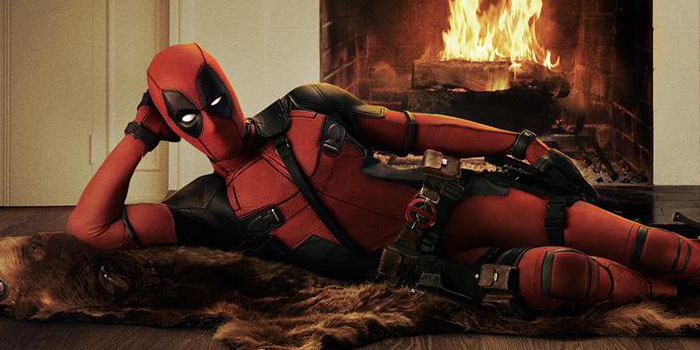 However, I’ve always been a fan of Wade’s exploits when they are a healthy mix of the slapstick with the sweet, the serious with the sublime. For my money, no other writer captures that alchemy of hilarity and humanity and heroism better than writer Rick Remender and his portrayal of Deadpool in his run on the series Uncanny X-Force.

How do you kill a circus?

See? Brimming with the ha-ha’s!

For those who might not know, Uncanny X-Force follows the mutant and X-Men member Wolverine leading a covert kill squad, funded by the wealthy Archangel, to neutralize threats to mutantkind in missions that are off-the-books and hidden from the judging gaze of their friends in the hero community. Wolverine recruited Deadpool in exchange for payment, as he knew that Wade, while unpredictable and, in Wolverine’s eyes, morally questionable, was nigh-unstoppable, with his healing factor and combat skills strong assets for the team. While Remender shone in how he scripted a Wade Wilson who would slip in and out of reality, crack-wise in the face of tense, overwhelming odds, he balanced that humor with showing a Deadpool who, while at the core emotionally broken, wants to do the right thing, whatever that is. 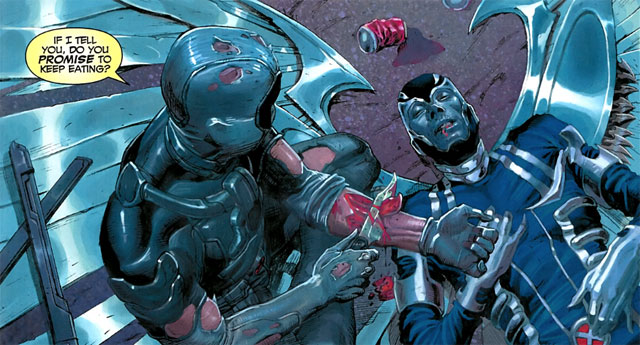 Deadpool nurses Archangel back to health.

This is most notably shown in how he interacts with the young boy known as Evan. In X-Force’s first mission in the arc “The Apocalypse Solution,” the team discovers that a cult known as the Clan Akkaba have taken to indoctrinating Evan with their teachings. Evan, who is the reincarnated murderous, long-lived mutant known as Apocalypse, is an innocent, with no memories of his past deeds. While the team almost murders Evan in cold blood to prevent him inevitably becoming the monster he emerged as in his previous incarnation, they eventually decide to bring the boy home and attempt to rehabilitate him. However, X-Force member Fantomex disagrees and shoots Evan in the head, killing him for what he sees as the greater good. 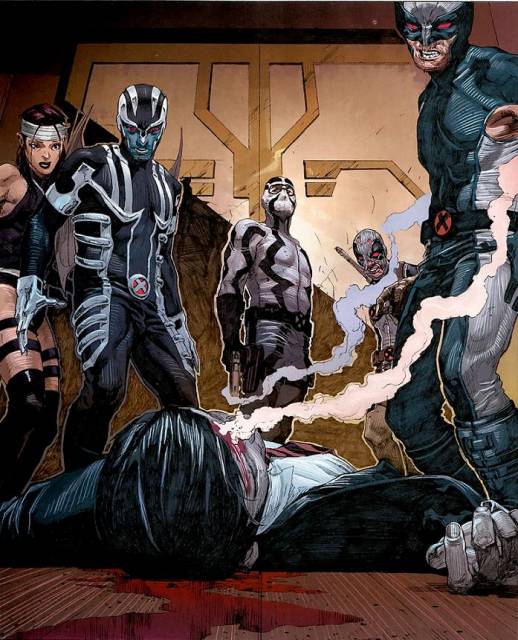 During the fallout conversation among the team members that follows, we begin to see that Deadpool might not be involved with Wolverine’s covert ops group for the money. While Wolverine attempts to rationalize Fanotmex’s decision, Deadpool has his own thoughts on the matter. 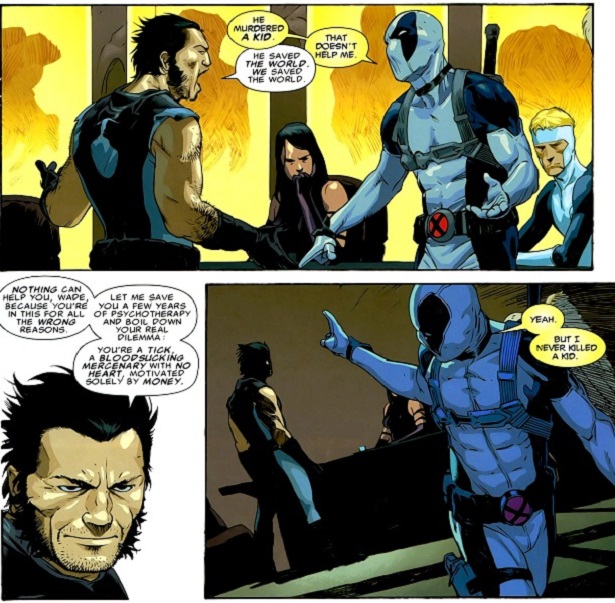 Wolverine and Deadpool have a philosophical difference of opinion.

After Wade storms away, Archangel notes that Deadpool never cashed any of the checks he was given for his service with X-Force. With that and his visceral reaction to murdering a child, regardless of the rationale, Remender gives us a Deadpool who, while unpredictable and off-kilter, has his own sense of morality. Murdering children, despite the moral justifications, is not something in Deadpool’s wheelhouse.

Deadpool would later rejoin X-Force and the team would discover that Fantomex cloned Evan and had been raising him in a virtual environment to see if the boy’s genes, tainted with the lineage of Apocalypse, could be overridden with a proper upbringing. Wolverine places the boy in his newly formed school for gifted mutants, but Evan is later kidnapped by the Brotherhood of Mutants, who wants to goad Evan into assuming the role of Apocalypse. Here again, we see a bit of Wade’s humanity shining through. 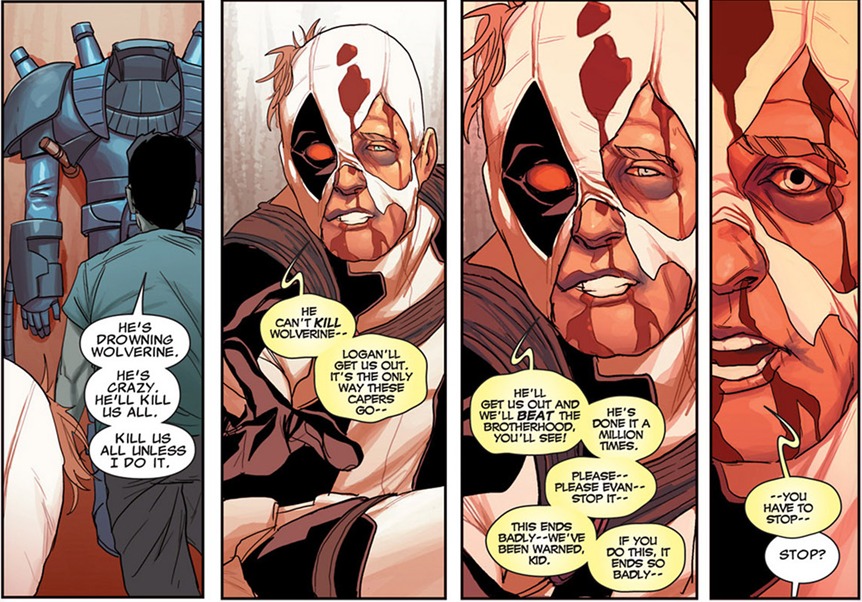 There’s a desperation in Wade, as he sees this as a chance to save Evan in a way that he wasn’t able to the first time. Also, there’s maybe a bit of hope in Deadpool that nurture can truly override nature, not just in Evan, but also in Wade himself. Wade is a man who is steeped in violence, who is plagued with psychosis and Remender hints that Deadpool sees in Evan an example of what he himself might be able to achieve someday. Or maybe Wade believes it’s too late for him to gain the redemption he might secretly want, which is why he desperately wants Evan to steer clear of the path of violence and murder that permeates Wade’s life. Evan is a sort of do-over.

Evan does eventually resist his genetic predisposition toward chaos, proving that Wade’s faith in him was justified. After the dust settles and X-Force disbands, Deadpool visits Evan at Wolverine’s school for a chat and a farewell. 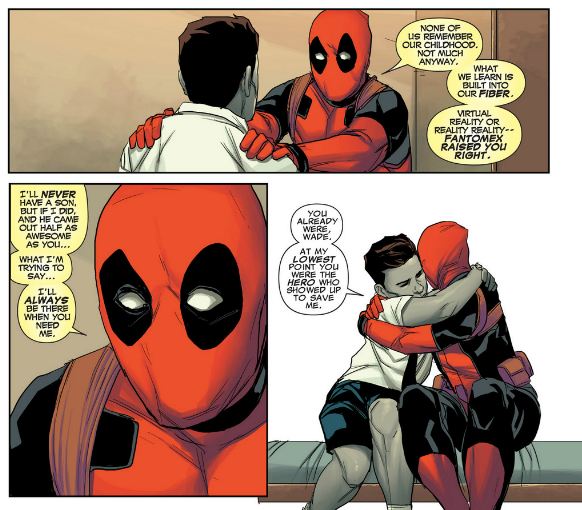 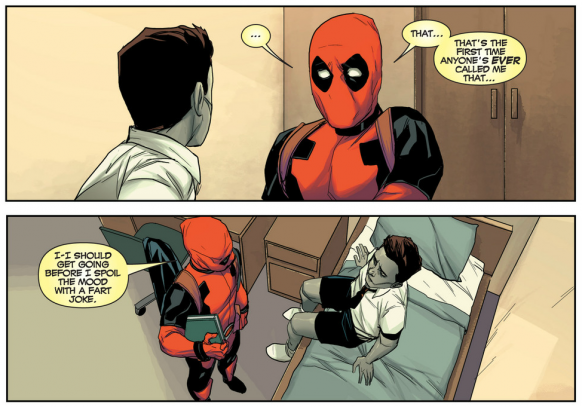 Not only does Remender use Deadpool in a way that brings on the funny even in some pretty dire situations, he also builds, throughout his Uncanny X-Force run, a character arc for Wade that results in true emotional growth that doesn’t discount the crazed nature of the antihero. He shows that the faith of a child bolsters Wade’s sense of self and heroism in a way that neither he nor his superhuman peers always recognize. Remender doesn’t throw the baby out with the bathwater, but also acknowledges that even a person like Deadpool, who’s chiefly known for his love of chimichangas, kill count, and bad puns, can evolve. Wade’s reward for believing in Evan is Evan’s belief in return and, in a way, Wade’s renewed belief in himself.

You should give Uncanny X-Force, written by Rick Remender with Jerome Opena (mostly) on art, a gander if you haven’t already, as it’s a masterclass in characterization and plot pacing. The entire run is available in paperback. Deadpool, starring Ryan Reynolds as the Merc with a Mouth, hits theaters this Friday.