“The Variants #3 has everything you could want in a superhero tale: quiet moments, bombastic fare, and nimble characterization, all worthy of one of the Marvel Universe’s most complex and compelling characters.”

Alternate realities are a sci-fi and comic book staple, and it’s no mystery as to why. Every day we’re plagued with choosing from X or Y or Z and agonize over what those choices, big or small, will do to alter our trajectory. Will we be sad? Fulfilled? At peace? Angry? What if we took a different path? Who would we have become? 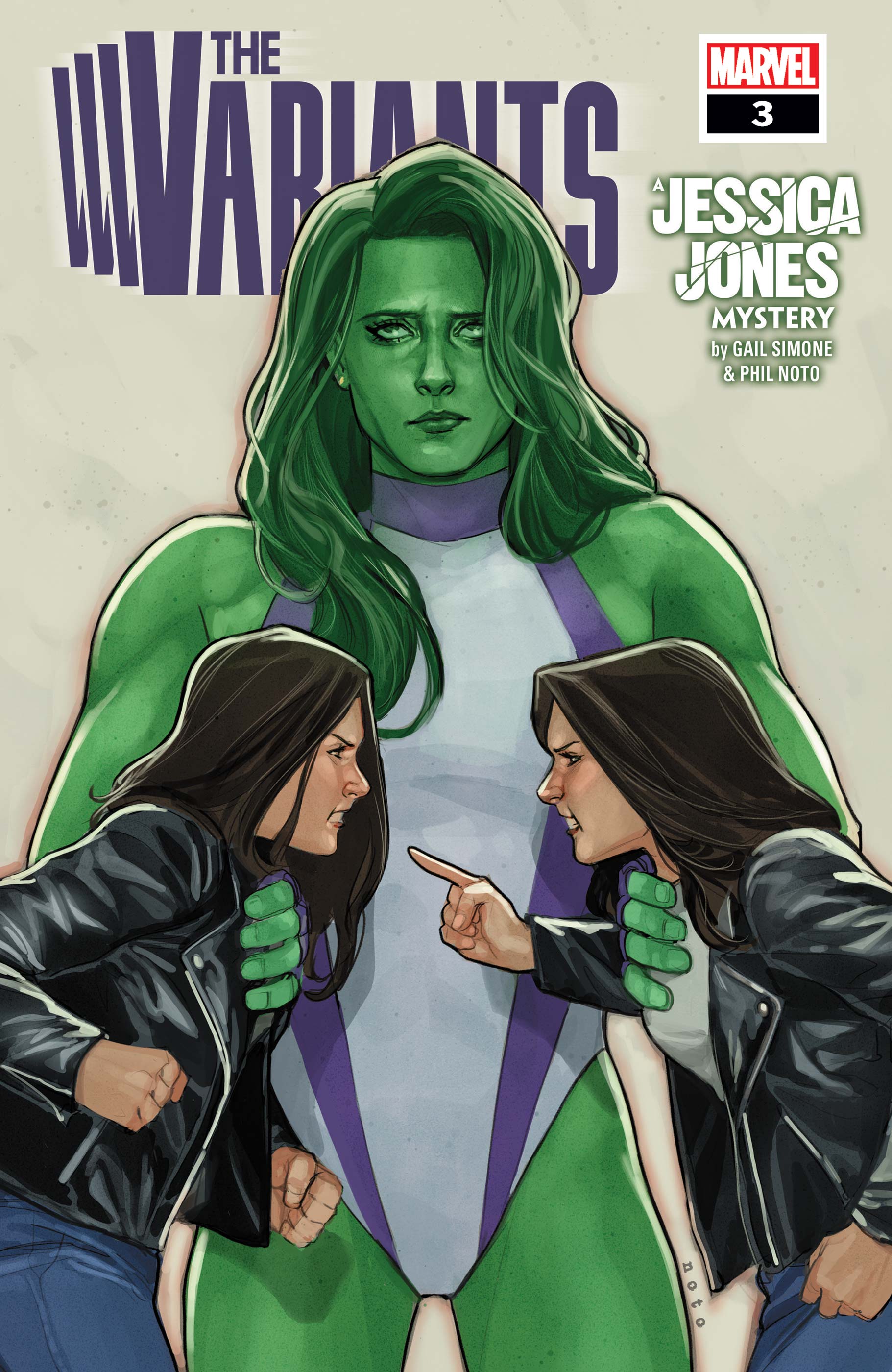 It’s a question–among many others–with which private investigator and sometimes-superhero Jessica Jones must grapple in The Variants, from the creative team of writer Gail Simone, artist Phil Noto, and letterer Cory Petit. In The Variants, Jessica is planted face-to-face with variations of herself: some close to who she is now, others wildly different, but all with enough of her personality with which Jessica can connect. That’s a good thing, as, in issue #3, not only do the Jessica variants need to figure out why they find themselves converging in the universe of Jessica Prime (“our” Jessica, as she’s called in the miniseries), but they also must contend with the possibility that the villainous Zebediah Killgrave—The Purple Man–might have planted a suggestion in Prime’s brain years ago that will put her and the city at risk. To further add a wrinkle in this space-time caper, Prime gets a hint that one or all of the Jessicas in her midst might not be worthy of her trust.

Those are a lot of plates to spin: multiple realities, different-but-similar Jessica Jones, a noir-esque mystery. But who are we kidding? Of course Simone, Noto, and Petit pull this off superbly, crafting a mystery that engages and mystifies without ever becoming convoluted and infuriating. None of this stacked creative team is new to weaving superhero yarns, and that’s a good thing, because getting Jessica “right” isn’t something that many creators can pull off well. Jessica Jones is my favorite new comic character of the last two decades, but only a handful of writers have been able to get her voice right since co-creator Brian Michael Bendis introduced us to Jessica all those many years ago. Writer Kelly Thompson was able to pull it off well, and it’s little wonder that Gail Simone has done the same. Simone is one of those writers that knows that without a strong basis in character, nothing else matters. The multiple Jessica conceit is a wonderful hook, but if we don’t believe that the variants are well-rounded characters in their own right, then the reader’s attention is lost. If we don’t buy into their interactions, then all the glitz of interdimensional storytelling will fail to dazzle. 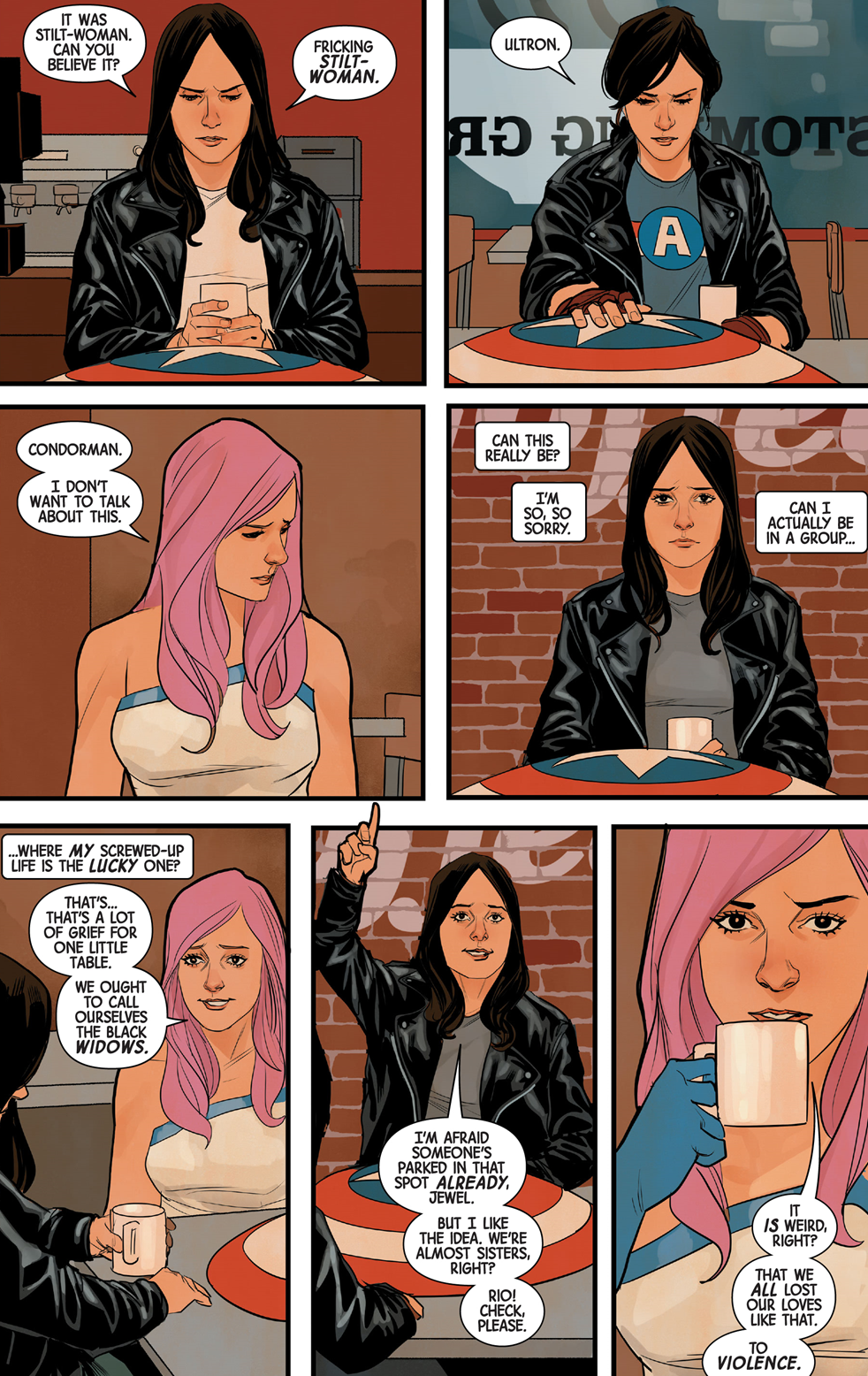 There’s no other better scene to show how well Simone pulls this off than with Prime’s interaction with Jewel, a variation of Jessica when she started out as a superhero. Jewel is younger than Prime and has yet to be enslaved and tortured by Killgrave. When Prime realizes that Jewel’s life hasn’t been sullied by the Purple Man, her reaction is that of relief, so much so that we feel that same washing away of dread and instead being filled with a sense we can breathe. Killgrave hasn’t marred everything across all of existence quite yet, and Simone’s writing lets us sit in that moment of happiness, however short-lived it might be. 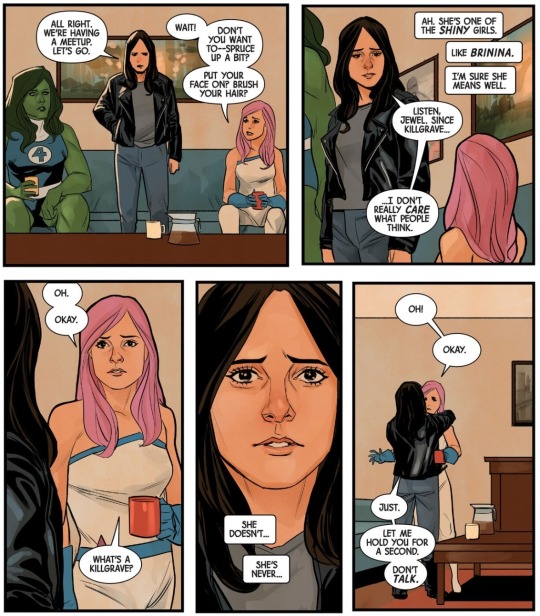 Those moments are sold by the expert hands of Noto, who, as with any project he tackles, brings beauty and emotion to every panel of issue #3. In that aforementioned interaction with Prime and Jewel, the facial movements have to help sell the dialogue then more than ever; it’s a powerful, pivotal scene–maybe the most emotional one, for my money–in the issue. Noto, of course, nails it, as he does with every other piece of linework throughout the installment. Petit’s lettering compliments the writing and action, particular in impact shots such as Prime’s husband Luke Cage fending off another Jessica variant.

The Variants #3 has everything you could want in a superhero tale: quiet moments, bombastic fare, and nimble characterization, all worthy of one of the Marvel Universe’s most complex and compelling characters.

The Variants #3 is on sale now from Marvel Comics. Issue #4 hits this Wednesday, October 26th.

Backed into an impossible corner, Jessica is forced to make a sacrifice play that could cost her a member of her own family. Guest-starring JESSICA JONES?

Bite-Sized Review: THE VARIANTS #3 (2022)
THE VARIANTS #3 has everything you could want in a superhero tale: quiet moments, bombastic fare, and nimble characterization, all worthy of one of the Marvel Universe's most complex and compelling characters.
10Overall Score
Reader Rating: (0 Votes)
0.0