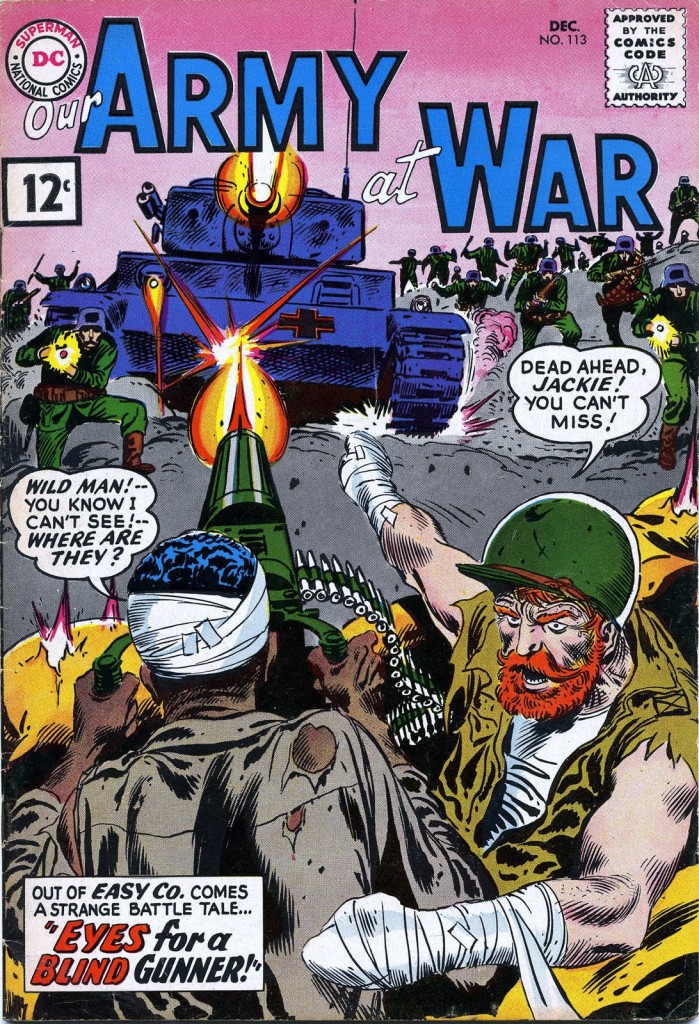 Cover for Our Army at War 113. Art by Joe Kubert

On 4 May 1961, thirteen people, seven African Americans and six whites embark on a bus ride through America’s Deep South to force the federal government to enforce the Supreme Court decision in Boynton v. Virginia desegregating interstate travel. The first of what would be known as the Freedom Rides, two of the travelers would be beaten outside of the Trailways waiting room in Rock Hill, SC, would pass through Georgia uneventfully, but in Alabama would be met with organized attacks led by the Ku Klux Klan, including the firebombing of the bus fill of passengers in Anniston, and mob attack in Birmingham in which the riders were brutally beaten with pipes. Images of the attacks in national newspapers and television shocked the nation and the world, and in response the Kennedy Administration began to feel mounting public pressure to enforce the Court’s decision. 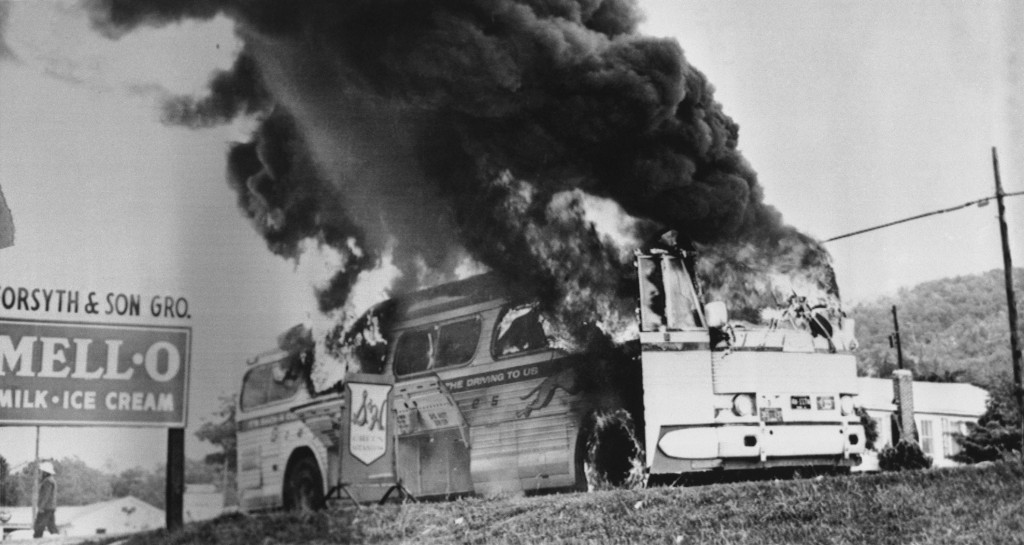 The Freedom Riders bus aflame in Anniston, AL on 15 May 1961 (Mother’s Day) after being firebombed by the KKK, who then attempted to block egress from the bus and burn the passengers alive, a plan only prevented by an undercover Alabama State Trooper aboard the bus.

Among the millions of Americans who watched the horrors unfolding in the South that summer were Robert Kanigher and Joe Kubert, the creative team behind DC’s war titles, including Our Army at War (OAAW), the book headlined by the World War II tales of Sgt. Rock and Easy Company. The two men decided it was time to make their own kind of statement on Civil Rights, and in issue 113 (December 1961) Kanigher and Kubert introduced Jackie Johnson, one of the very first African American characters in mainstream comics that wasn’t a stereotype, or played for laughs. At the height of their collaborative powers, Kanigher and Kubert gave their readers (many of which at the time were pre-teen boys) an eloquent lesson in racial equality.

Entitled “Eyes for a Blind Gunner,” the Easy Co. story made absolutely no mention of Jackie’s skin color. Teamed up with Wild Man (an American Jew) on one of Easy’s heavy machineguns, and tasked to hold a vital position, Jackie is treated exactly like any of the other “Combat Happy Joes of Easy Co.” Sgt. Rock and the rest of the company take it for granted that they can count on Jackie to do what’s asked of him, and to fight hard, because he’s just like them. More, he’s a part of them, and his heroism in the story is equal to his white partner as they work together to fight off a major German assault, despite wounds that leave Jackie temporarily blind, and Wild Man without the use of his hands, forcing them to function as one man.

The brilliance in the story lies in the absolute lack of any mention of race. Indeed, in terms of plot, “Eyes for a Blind Gunner” is a standard Easy Co. story, featuring an enlisted soldier who just happens to be black. Otherwise, he is no different than his comrades. Jackie is patriotic, determined, deadly in a fight, and as war-weary and homesick as his buddies. Page after page Jackie is shown to shoulder the same responsibilities, run the same risks, and fight the same fights as his white companions who expect no more and no less of him than they do of themselves and of each other. He’s just another soldier, a dogface getting through one more day of war.

This might not sound like much, but consider that one of the most powerful ways to deal with discrimination in any kind of story is simply to include characters who are black, or female, or gay, or trans as equal members of any cast of characters so that whatever it is that supposedly makes them “different” has absolutely no bearing on why they are there, what they do, or how others feel about them. The power of storytelling true integration and equality, as Kanigher and Kubert did in OAAW 113, is to reduce prejudice to its rightful place as an idiotic fallacy. The fact that they told this story in a war comic set during World War II, and featuring a group that was already becoming iconic, only added to the power of the story. Sgt. Rock and Easy Co. are by far the most famous characters in American war comics, and they carry the moral weight of American memories of World War II as a just war in which we were on the right side for the right reasons, a memory narrative that Our Army at War and DC’s other war titles helped to perpetuate. So an ultimate Band of Brothers like Rock and Easy Co. accepting Jackie as one of their own, as their equal in every way carried tremendous moral force.

And all without mentioning black or white even once. 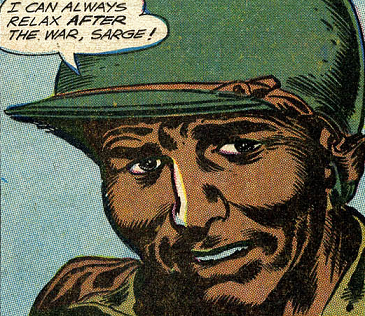 Jackie would go on to become a regular in OAAW and Sgt. Rock, although his next appearance in the former would not be until November of 1965, when Kanigher and Kubert responded to the March to Montgomery and the violence in Selma, AL by comparing American racism directly to Nazi racial ideology in OAAW #160’s “What Color is Your Blood?”  — But that’s another story.