This June, Dark Horse Comics will launch the maiden voyage of Sword Daughter from writer Brian Wood and Mack Chater, the creative team who gave us the raw and emotional Briggs Land. In Sword Daughter, a father and daughter, the Viking Dag and the infant Elsbeth, set out to cut a swath of revenge against those who slaughtered their village. Blending the Viking revenge saga with the artfulness of classic samurai cinema, Sword Daughter is anchored by the relationship of that father/daughter pair and whether it can be repaired.

In anticipation of the book’s debut, we have an exclusive first look at the cover of Sword Daughter #2, breathtakingly rendered by artist Greg Smallwood, along with commentary of the step-by-step process of bringing the cover to life. 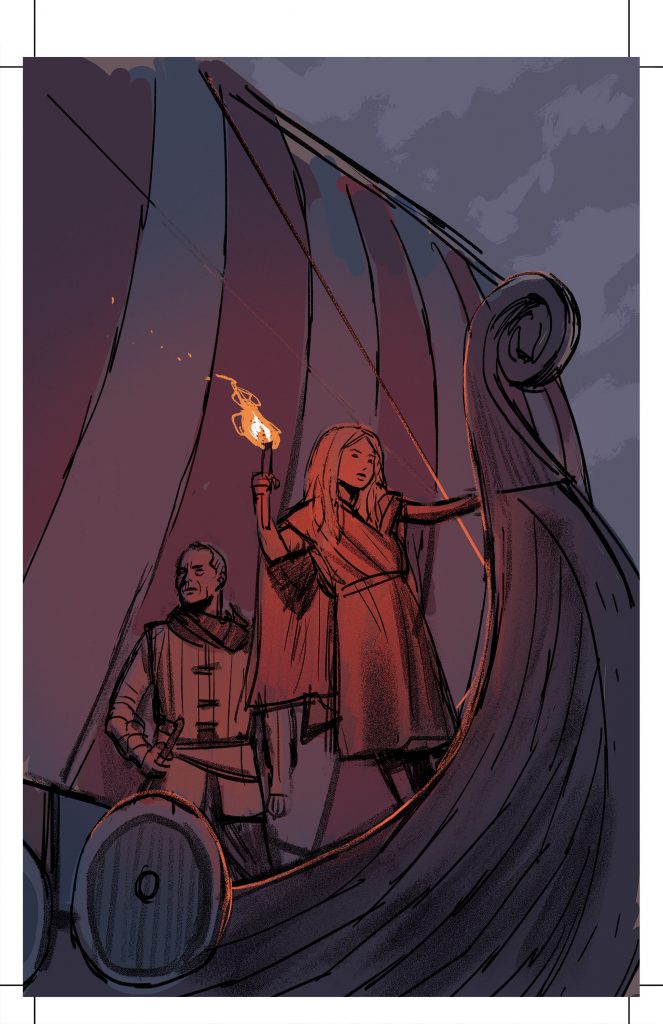 Step 1: Thumbnail: “​I try to work everything out in the sketch in order to avoid any big surprises when it comes to the final art. I decide on colors and lighting during this stage.” 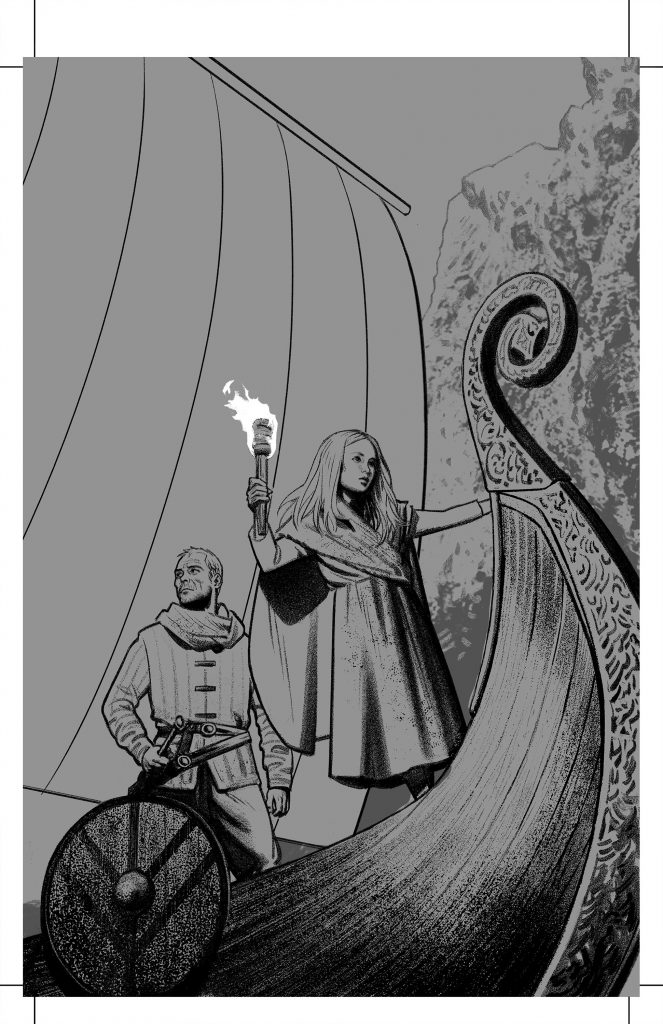 Step2: Line Art: “Once the sketch has been approved, I move to the line art stage. I work entirely digital so I’m able to keep certain portions of the art (like the torch flame and background cliffs) on different layers.” 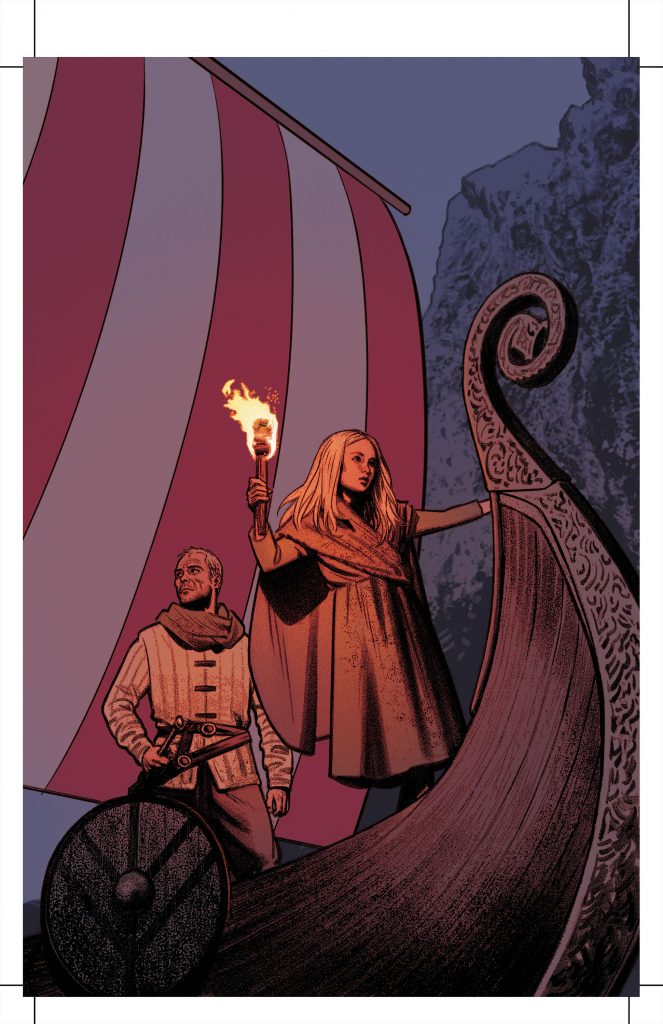 Step 3: Colors: “Almost there. I’m really happy with the rich colors but the image looks a little flat.” 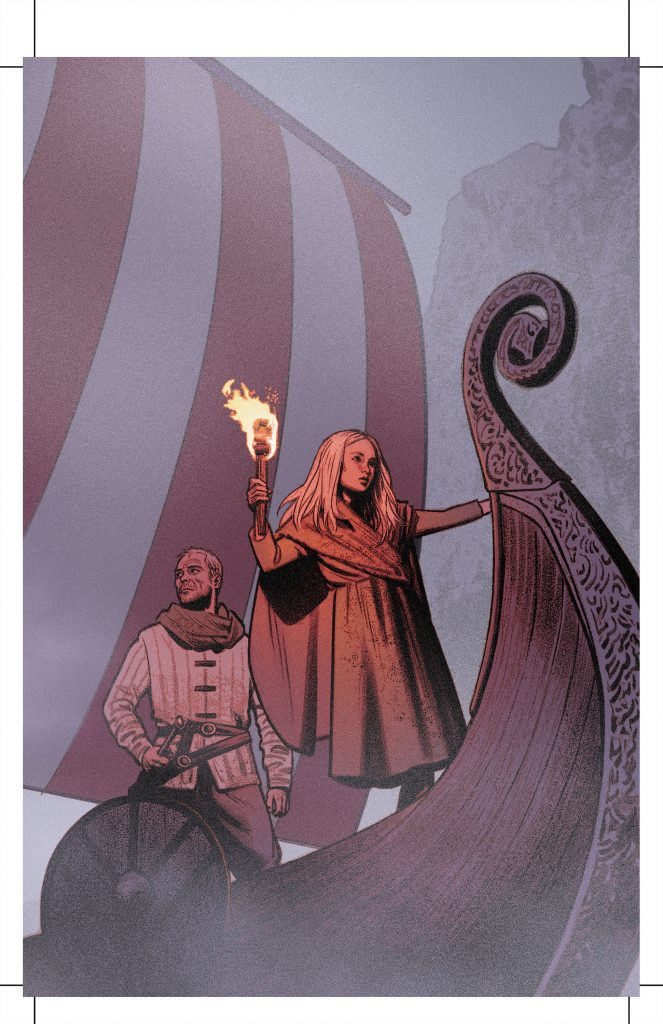 Step 4: Final: “I add mist/fog to give it a bit more atmosphere and establish some depth. Now it’s all done and ready to be sent in!”

Smallwood’s cover tells a story of determination of purpose and a disconnect in relationship in Dag and Elsbeth as they navigate their longboat through the water’s haze. It’s a masterclass on how covers with quiet moments are just as gripping as explosive bombast and Smallwood’s art makes us want to read Dag and Elsbeth’s tale all the more.

From the official description of issue #2:

Revenge is violent and heartbreaking, but for Dag and his semi-feral daughter, the clash of swords is a chance to heal old wounds. First stop is the Shetlands and a serial killer who must be put down.

And from the press release about Sword Daughter:

This summer, writer Brian Wood, artist Mack Chater and Dark Horse Comics will unleash the new ongoing comic book series SWORD DAUGHTER, a Viking revenge saga unlike any other. The co-creators of the acclaimed Briggs Land, along with colorist Jose Villarubia, letterer Nate Piekos and cover artist Greg Smallwood, are creating a raw and violent story that is a testament to the power of redemption and the resiliency of family, and a visually stunning tribute to samurai cinema.

In SWORD DAUGHTER, the Forty Swords arrive at night and, under the cover of darkness, murder an entire village. Only two people survive the slaughter: the infant Elsbeth and her grief-stricken father, Dag. Setting off on a revenge quest that will span the width of Viking Age Europe, they find the key to repairing their damaged relationship lies in the swords they carry.

“I find endless inspiration in history, and specifically Norse history, the struggle of men and women to survive amidst violence and forbidding landscapes,” said Wood, who previously wrote and co-created the acclaimed Viking comic book Northlanders. “In SWORD DAUGHTER, Mack and I are bringing in very relatable themes of protecting your kids, preparing them for survival in an uncaring world, and the guilt that comes with knowing there’s only so much you can do. The father, Dag, has effectively abandoned his infant daughter for ten years, and now that he’s back he’s realizing that his daughter had gotten along without him, despite him. Having a place in her life and in her heart is not automatic. He has to atone for his past and earn her trust.”

“I’ve always loved European comics, Bande Dessinee,” said Chater, the acclaimed graphic novel artist and former video game art director. “I grew up reading them and loved how they used the visual narrative of a book to tell a story. The colour palette could reflect both the landscape and the tonal feel of the book, to elicit an emotional response from the reader. As soon as Brian and I started talking about SWORD DAUGHTER, we both realised that we had similar loves, from those classic Bande Dessinee to the old samurai movies like Sanjuro or Harakiri, and that this would be the perfect book to show these influences and loves visually.”

“The influence of Samurai cinema is evident in the structure of the story, the classic revenge-quest narrative, and the overt nods to things like Lone Wolf & Cub, Red Sun, and Lady Snowblood,” said Wood. “And each issue is eight pages longer than the standard monthly comic, so we can linger on locations and let moments land properly.”