Writer Tim Seeley is no stranger to small towns or celebrity, as he weaves both into the stories in his DC Comics/Vertigo series Effigy. The comic follows Chondra Jackson, a former child star-turned cop who’s exploring a murder in her small town connected to her former life of celebrity. Her investigation has led her to a convention celebrating her television series Star Cops, and what she finds in issue 4, out this week, takes her a rabbit hole that becomes more and more curious. Mr. Seeley took the time to speak with us about what’s going in with Chondra in the current issue and his experiences on the convention circuit.

FreakSugar: When last we spoke, we discussed a Chondra who was still settling into her role as a cop in Effigy Mound. What kind of headspace is she in at the beginning of issue 4?

Tim Seeley: I think she’s excited to have a chance to “be a real cop,” even as she’s starting to realize what that actually means. I think we also kind of imply that being at the Con makes her a little “jealous” of her old co-stars.

FS: The story has to do a lot with our perceptions of reality, both in regards to “normal” life and the idea of celebrity. Chondra’s mother seems desperate to retain some semblance of the life that was once afforded her by her child actress daughter. How much of a grip on reality do you think she has? Without spoiling things, what kind of reaction do you see Chondra having when she discovers her mother is arranging a reality show behind her back?

FS: We get to see more of Chondra at the Star Cops convention this issue where, among other things, she encounters some very open sexual activity. How much did you draw on your own personal experiences in crafting the world of the convention in Effigy?

TS: Heh…um…well, I’ve certainly seen some things in my day. I assume if I ever make it to DragonCon, I’ll think what I pit in Effigy was pretty tame.

FS: What experience at a convention sticks out as the strangest for you?

TS: I went to an anime con in central Wisconsin, not far from my hometown. It was the same weekend as the opening of deer hunting season, so the hotel was filled with a weird combo of hormonal anime fan teens, hormonal “widow” wives out on the town, and frightened male strippers. 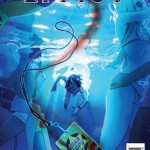 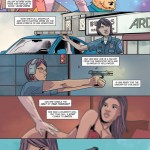 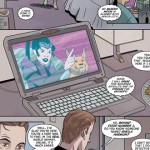 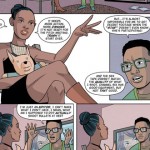 FS: How would you describe Chondra’s attitude toward Edie, her former Star Cops co-star?

TS: I think she’s still figuring that out. Edie is a huge fan of a part of her life she’s been trying to get away from.

FS: Will get the opportunity to see other veterans of Star Cops and, if so, will they have a role to play in the overarching mystery?

TS: Oh, for sure.  Not just yet. But, eventually for sure.

FS: How will Chondra’s experience at the convention at the end of issue 4 change her attitude toward her new life as a cop and as a former child star?

TS: She’s realizing there’s something WEIRD going on here and her path is not what she anticipated.

FS: There’s a lot of emphasis on the Hero’s Journey in this issue. If Chondra is our hero, which phase of that journey do you see her at the moment?

TS: “Crossing the threshold?” I dunno, I’m not as good at this monomyth thing as George Lucas.

FS: At the end of the issue during her talking head aside, Chondra wonders if her life is scripted. That seems to be a very deterministic attitude on how our strings are being pulled. Who are the people or influences you see as most tugging at Chondra’s life?

TS: Me. The editors at Vertigo. The readers, who tell us if we’re doing a good job by buying the book. Hollywood.

FS: What can we expect in the next issue, without giving too much away?

TS: An abrupt shift in the nature of the story! And lots of creepy stuff. I think the ending of 5 is pretty awesome and totally surprising.

Be sure to check out our review of the first issue!