This past week, in honor of the character’s 75th year in pop culture, DC Comics released the Wonder Woman 75th Anniversary Special, showcasing stories from a bevy of artists and writers that highlighted what makes the Amazonian warrior so special.

One particular story that stood out in a compilation of phenomenal yarns about Diana of Themyscira is “Big Things One Day Come,” brought to life by the writer/artist team of Gail Simone and Colleen Doran. Simone, in addition to her impressive portfolio of work on such books as Birds of Prey, Secret Six, and Clean Room, has the distinction of being longest-running female writer of Wonder Woman’s tales. Likewise, while also having such projects as The Sandman and A Distant Soil under her belt, Doran has put her own mark on the superhero.

In nine pages, Simone and Doran touch upon what separates a Wonder Woman tale from good to great. Therein, Professor Verdant employs a Kryptonite-powered, mind-controlled gorilla known as Titano to attempt to dispatch with Superman as the beginning of his plan to wipe out the human race so that the animal kingdom may regain control of the planet. Verdant didn’t plan on Diana interceding on the Man of Steel’s behalf, who stops the gorilla’s rampage—with a little help from a new young superheroine. 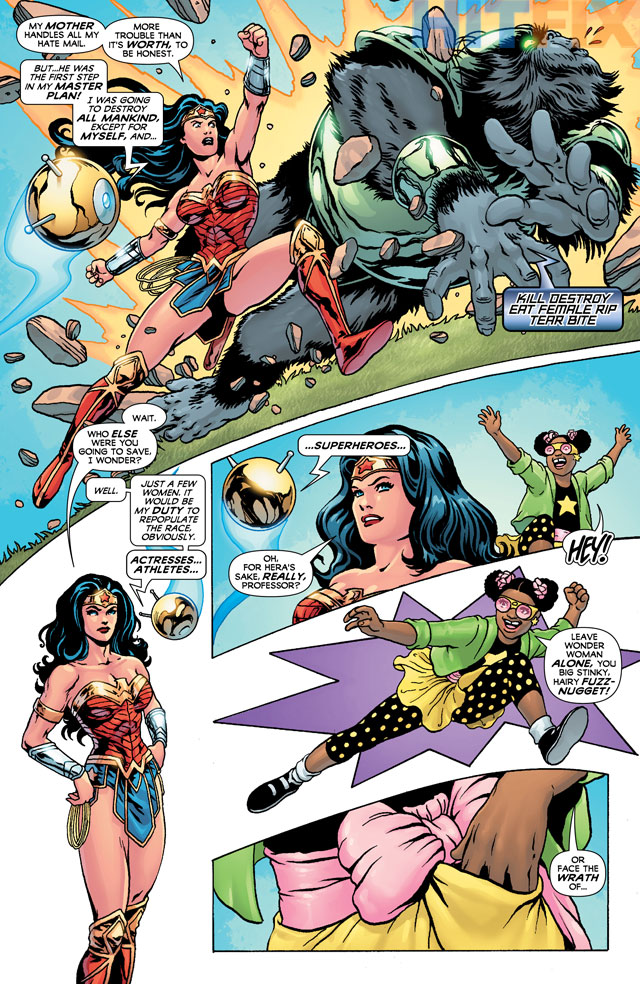 What makes the story so poignant is that Simone and Doran manage to shine a spotlight on all of the aspects of Wonder Woman that make her special—her strength, her intelligence, her kindness, her generosity, and how she empowers others—and meld them into a narrative in a way that makes sense. Some storytellers struggle with the various, seemingly conflicting motivators and movers that make Diana tick, but what they fail to see is that Diana is just like the rest of us. It’s not an either/or supposition. Like all of us, we have the capacity to be strong and gentle, kind and ferocious in the face of injustice, all contingent on the situation at hand.

This is particularly brought to the fore in how Wonder Woman puts an end to Titano’s rampage. While Diana isn’t afraid to use brute force against the creature, she’s also not cruel. She realizes that Titano’s actions are not his own, so while she uses her strength to halt his destruction, she attempts to put a halt to it as quickly as possible, not just for the sake of the bystanders, but also that of Titano. 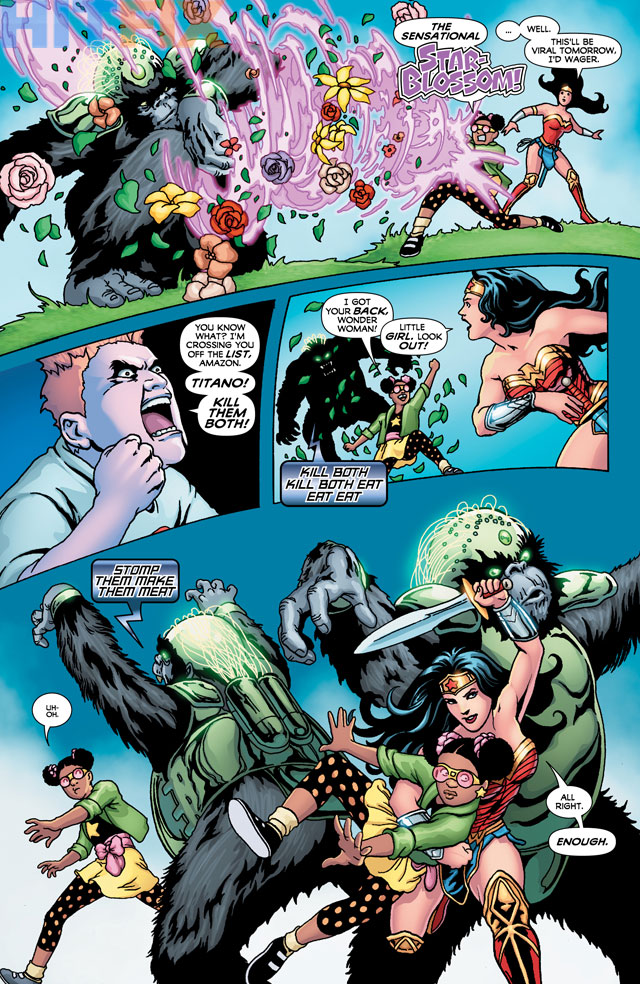 A discussion of “Big Things One Day Come” would be incomplete without addressing Diana’s interaction with Star-Blossom, the young hero who attempts to aid her in her battle with Titano. While Star-Blossom is full of spirit and a desire to help Wonder Woman, she also came to the fight hoping for some sort of wisdom to help guide her as a fledgling hero. Instead of reproaching Star-Blossom as being too young to be a superhero, Diana tells her

Heroism is not a function of the calendar, sister. It’s your life to live.

After having Star-Blossom vow to protect the innocent, Wonder Woman dubs her Princess Bouquet, telling her that she places her trust in the new hero.

Recently, Wonder Woman appointed an honorary United Nations ambassador for the empowerment of women and girls and, with Simone and Doran’s story, it’s easy to see why. Simone and Doran show in “Big Things One Day Come” once again that Wonder Woman’s greatest strength isn’t just in her physical abilities, but how she inspires others to be their own heroes.

The Wonder Woman 75th Anniversary Special is on sale now from DC Comics.