Since early last fall, Vertigo Comics has made a huge push to offer a variety of new comic book offerings to fans who are looking for a bit of story that falls outside the normal boundaries of superhero tales of derring-do. One of the books to emerge out of that renaissance is Red Thorn from writer David Baillie and artist Meghan Hetrick, a title immersed elbow-deep in Scottish lore and mythology.

In advance of Red Thorn #4 hitting newsstands this week, Mr. Baillie spoke with me recently about the comic’s blend of far-flung fables and modern-day mystery, the moral ambiguity of the character Thorn, and how Ewan McGregor in Trainspotting contributed to the thinking behind one character’s design.

David Baillie: No problem at all – thanks for having me!

FS: For folks who might have not picked up the book, what would be your elevator pitch for Red Thorn?

DB: Before we launched the series our elevator pitch was all about Thorn the sexy pagan demigod, his abs, Lauren’s hair, Glasgow city, Scottish mythology and fabulous scenery, all of which is definitely in there… But maybe now that we’re on the eve of issue 4 hitting the stands I should mention all the other things that we’re folding into the mix: folk horror, generational secrets, smart-mouthed characters with hidden agendas, supernatural historical conspiracies, ancient grudges and horrible monsters. 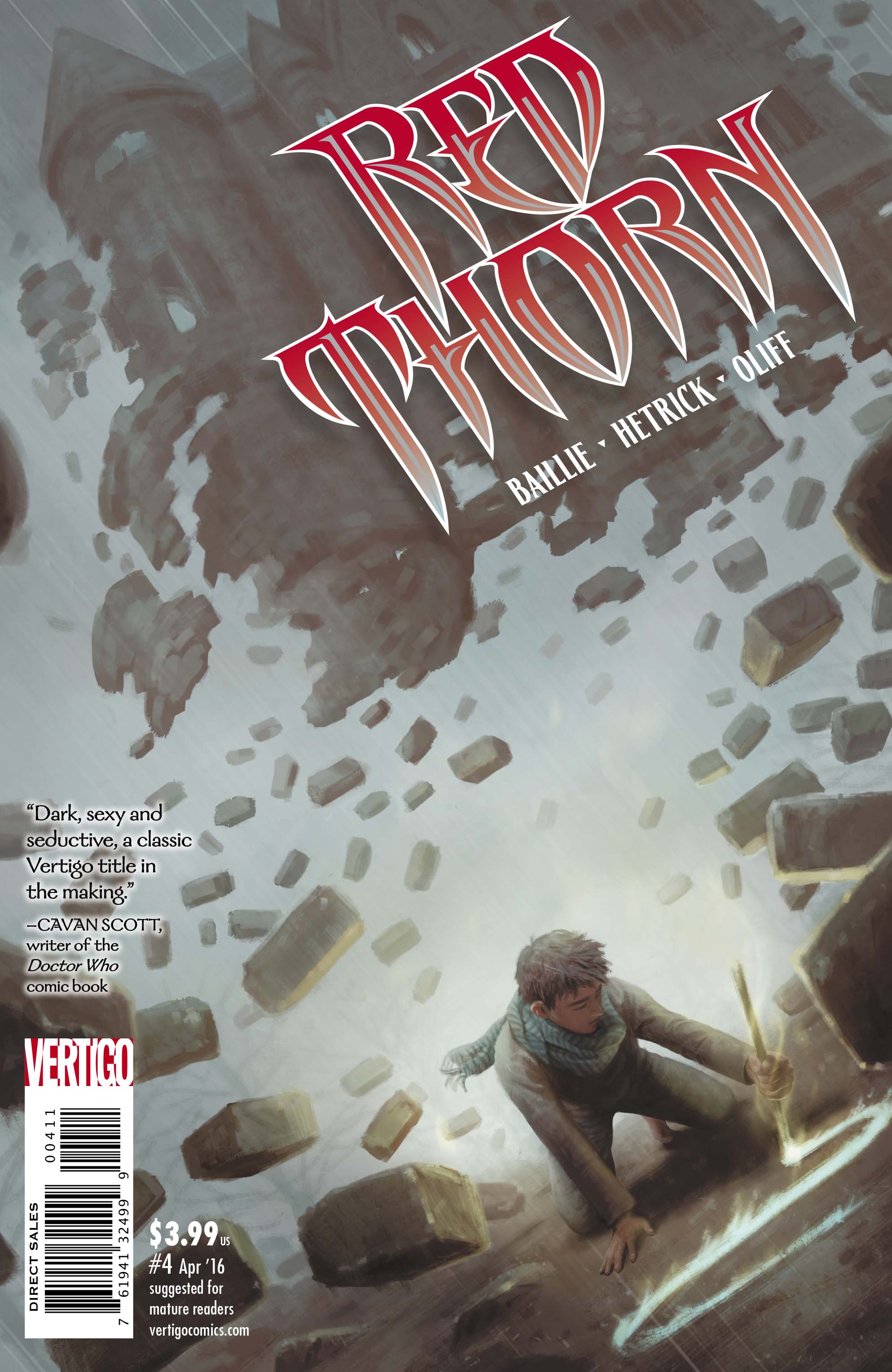 FS: How would you describe Thorn? I appreciate that even through issue 3, his motivations and which side of the aisle in terms of good or evil he falls upon is a bit ambiguous.

DB: I think someone put it best recently when they stated very simply in a review: ‘Thorn is a dick’. Thorn’s aim as stated in our first arc – of getting rid of his mortal enemy Belatucadros – is admirable. How he goes about achieving that might not be.

I think it helps that Cadros (as characters averse to five-syllable names prefer to call him) is definitely a bad guy. Whatever’s he’s been doing for the last sixteen hundred years, in Thorn’s absence, has been to the detriment of humanity. So Thorn scores points for trying to put an end to that, no matter what other motivations he has.

So far we’ve seen Thorn use his charm and wit to disarm those around him, even those who we think are on his side. He’s also cunning and likes to keep his plans to himself until the very last moment. That in particular has been a challenge to write, because your intuition as a writer is to unfold the story at a steadier pace, planting clues throughout, whereas that’s not the sort of deity Thorn is at all. He prefers to finish his enemies off with a completely unexpected, explosive attack. 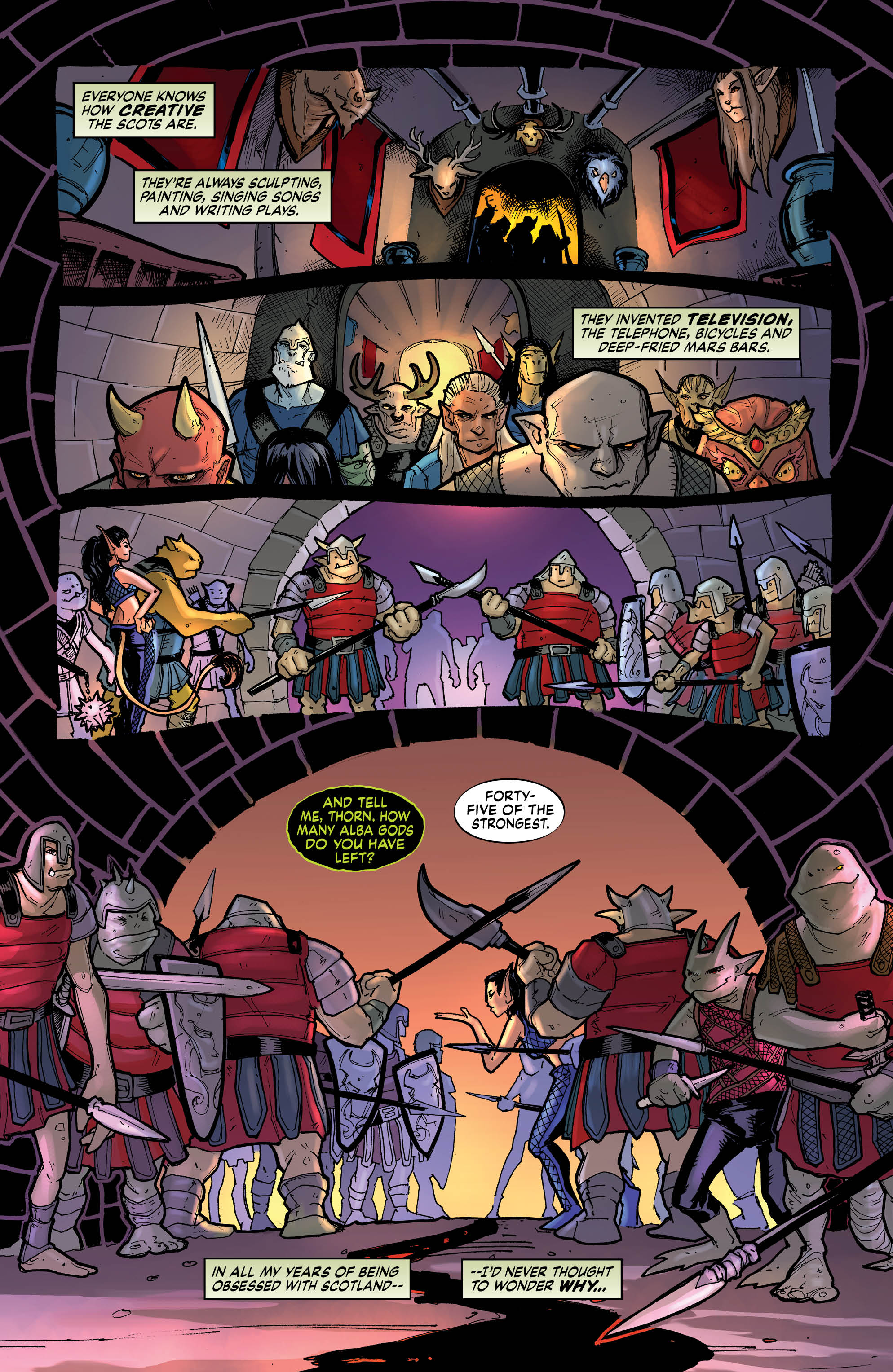 FS: Isla is our human through character, an American in Glasgow trying to figure out what happened to her sister 26 years ago. Why did you decide that Isla should be an American? Was it to provide an outsider’s perspective of Glasgow?

DB: I needed someone who was in a position to question why things are the way they are, be that something Glaswegian, or supernatural. She’s genetically Scottish, which is all I really needed for the story to work – and I think it probably helps that not all of our characters speak in a guttural Glaswegian accent. Having Isla be American allowed me to balance the speech patterns and avoid making the dialogue feel like work at any point. (Hopefully. That was my intention, anyway!)

But apart from place of birth, Isla feels like a very Glaswegian character: sassy, smart and unafraid of confrontation.

She also likes haggis and Irn Bru, even though it’s never explicitly mentioned in the comic. I’m the writer and can confirm that that’s definitely the case.

FS: Isla has a gift—or curse—of her drawings coming to life, the same as her sister. Is her attempt at discovering what happened to her sister also a way of trying to learn more about herself?

DB: Not explicitly. Isla had spent a year exhaustively searching for evidence of what happened to Lauren before she discovered that her missing sister had shared, at the very least, an obsession with drawing Thorn. This definitely suggests that they had the same powers, but we’ll have to wait until issue seven for confirmation or denial on that.

The way revelations present themselves to Isla suggest that she’s subconsciously aware of elements of her predicament and how it relates to the larger picture though, so maybe on some level, without knowing it, her epic search was also a quest to understand the abilities she’d denied herself access to for all those years.

FS: We’ve seen a lot of mythological creatures already playing a role in Red Thorn. What appeals to you about mythology, particularly Scottish lore?

DB: I love the way old folk tales and mythological sagas make the hairs on the back of your neck stand on end. Part of me hopes that it’s some sort of genetic memory, that our ancestors heard versions of those stories hundreds of years ago and that’s why they have such an effect on us. Either way, I think that these stories having become part of our societal traditions has lent them a great power – and as a storyteller that’s completely irresistible.

Also monsters are cool. And when you put them in tartan or kilts they instantly become even cooler.

FS: In issue 3, we get our first glimpse of the narrative outside of Glasgow, following a young man in Morocco. What can you tease about what we’ve seen so far? Will we get to travel outside of Glasgow even more?

DB: Unfortunately, as much as I love Morocco, we won’t be returning there for some months after our next visit in issue 4. The rest of the first year is almost exclusively set in Scotland, and mostly Glasgow.

There is a reason we’re in Essaouira though, and that will become very important as the story progresses.

FS: You hail from Glasgow. What about the area appeals to you in terms of a setting for the book?  How much of yourself is reflected in the story? The place seems as much as a character as Isla or Thorn.

DB: Glasgow’s a great city and everyone who comes here almost instantly falls in love with the place. When I was speaking on panels at comic conventions last year, I declared more than once that Glasgow is the sexiest city on Earth, and challenged the audience to offer any evidence to the contrary. No one did. I think that means it’s a fact.

It’s also a city that has evolved and grown up with a very strong storytelling tradition, which works very well with what I want to do with Red Thorn. There are stories on every street, and in every bar. And the people of Glasgow aren’t afraid to tell you those stories!

FS: [Red Thorn artist] Meghan Hetrick’s pencils are gorgeous and, as much as this is a modern fantasy, the human characters feel incredibly real and grounded. What is the collaboration process like in terms of deciding on the look of the series?

DB: Meghan and I laughed about this just yesterday – she threatened to post up the script’s character description for a character from issue 8 (which she’s drawing right now) alongside what she drew. They bear no resemblance to each other at all!

Meghan’s totally in charge of how the characters look, I suggest what I see in my head as I’m writing it, and mention if there is some element important to the story, but apart from that she’s the expert on how it all looks on the page. Meghan has an incredible imagination and I’d be a fool to stand in the way of that.

Similarly Steve Oliff has absolutely gone to town on the colors, rendering our world with a palette that’s totally unique in comics. And Todd Klein, while firmly anchoring the series in the Vertigo tradition with his lettering is also doing some very daring and exciting things, especially with some of the monsters that we’ll meet over the next couple of months. 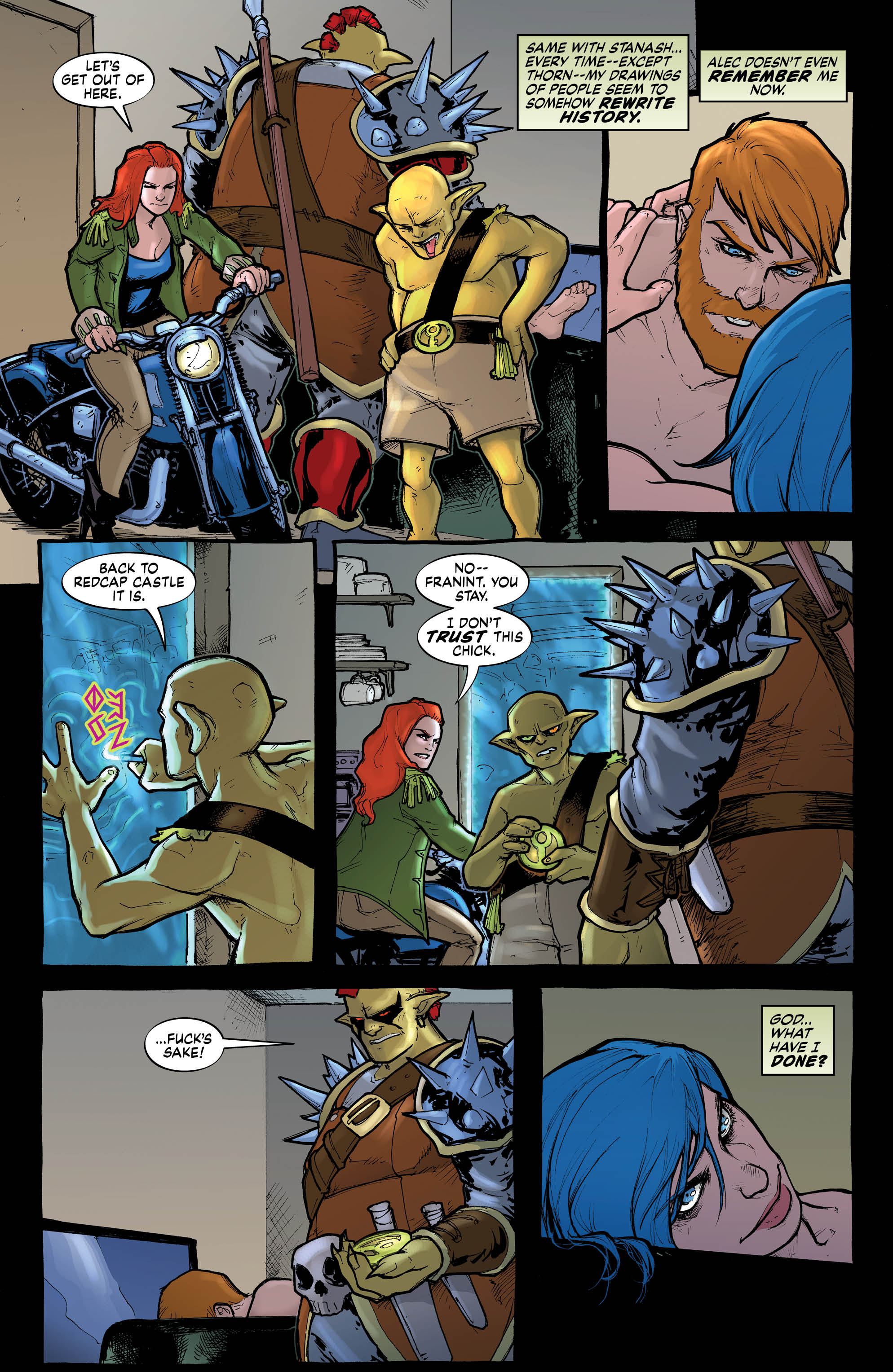 FS: Speaking of the title’s look, I’d remiss if I didn’t mention the look of Thorn, who seems an amalgam of rock glam and modern day metal. Why was this a perfect look for the character?

DB: I think when we started we had a sort of mood board of influences, and I’d suggested a young Ewan McGregor in Trainspotting. Shelly Bond (Vertigo Executive Editor) had thrown in classic era Adam Ant and Mick Jagger, and from there the 90s grunge aesthetic that we’ve been hinting at throughout the first few issues (for good reason – again, wait for issue seven!) sort of precipitated in the rock god design that everyone seems to have fallen in love with.

FS: Issue 4 hits this week. What can we expect coming up?

DB: Issue four is Meghan’s favorite – she feels like this is the chapter where she really hits her stride. As you’ll see in our preview we start this chapter in 410AD, where readers will get their first glimpse of the horrible God Belatucadros. We’ll also learn of the disagreement, and war, that saw Thorn imprisoned for sixteen centuries.

Then we’ll get to find out why Tarek has been drawing maps his whole life, spend more time with everyone’s favorite Red Cap, Franint, and Glasgow gets some new… Architecture.

FS: Again, thank you so much!

DB: Any time. Thanks for having me!