This year marks the 80th anniversary of Action Comics #1, the first appearance of Superman, the godfather of modern superheroes. This benchmark also happens to coincide with another comic benchmark: the 1000th issue of Action Comics, the first comic book series to reach that landmark number.

However, while we celebrate these achievements in comic book publishing, it cannot be overstated that we must not neglect to remember that Superman and his world and their place in Americana would not be possible without the grit, tenacity, and persistence of the creators of the Man of Steel: artist Joe Shuster and writer Jerry Siegel. While many know that the duo created the Metropolis Marvel, it’s possible that casual comic book readers may not the pair’s personal history that eventually led to Superman’s first appearance: the many pitch rejections from numerous publishers, the moments of doubt and uncertainty.

Even fewer people may know the history of Shuster and Siegel after they cashed the check that would make Superman property of National Comics (which would later become DC Comics). The duo struggled—financially, professionally, and, in the case of Shuster, physically—after leaving DC.

In the graphic novel The Joe Shuster Story: The Artist Behind Superman, out today from Papercutz’s Super Genius imprint, writer Julian Voloj and artist Thomas Campi tell the story of Mr. Shuster, from his early days to his interest in art and storytelling to his eventual meeting of and friendship with Jerry Siegel. Using the cultural tone of the United States and the nature of comic book publishing as a backdrop, Voloj and Campi show how the hardships Shuster faced post-Superman and how, while living through often tragic circumstances, he pushed forward, much like his famous creation.

I spoke with Mr. Voloj recently about the idea behind The Joe Shuster Story, why the creative team chose to focus on Mr. Shuster, and the emotional experience of crafting the tale. 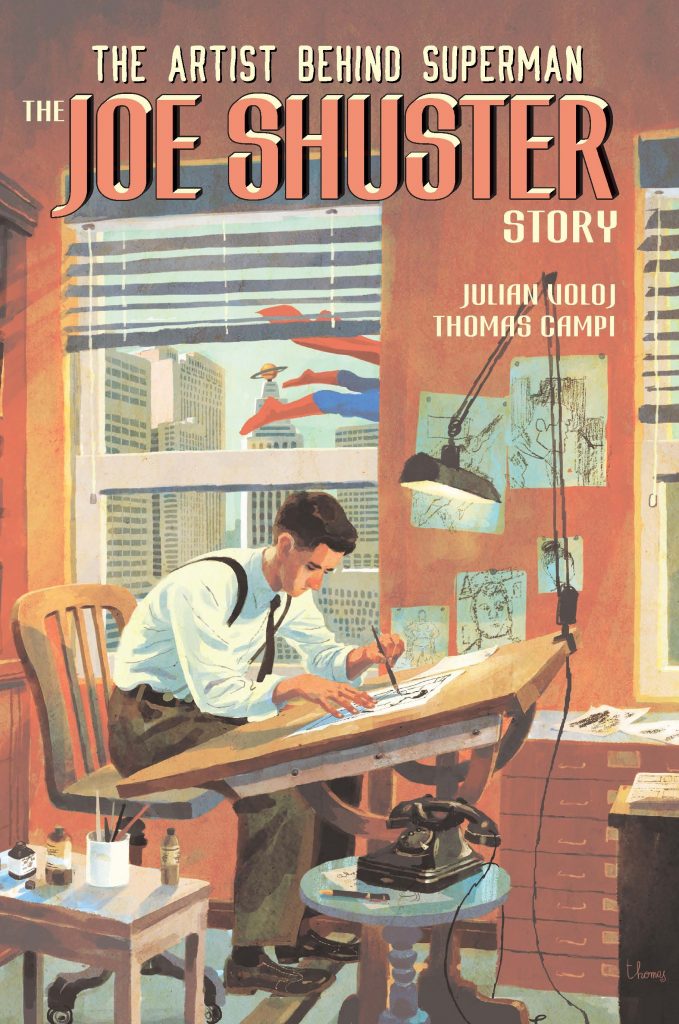 Cover to THE JOE SHUSTER STORY

FreakSugar: For folks considering picking up the graphic novel, would you consider The Joe Shuster Story a straight biography?

Julian Voloj: Not at all. We’re putting Joe Shuster’s life into the broader context of the American comic book industry. It’s the real origin story of Superman and all the pop-cultural influences that inspired him, it’s the story of all the creations that were inspired by him, and most of all, it’s the story of a friendship between two kids from Cleveland who grew up experiencing hardship after losing their creation. 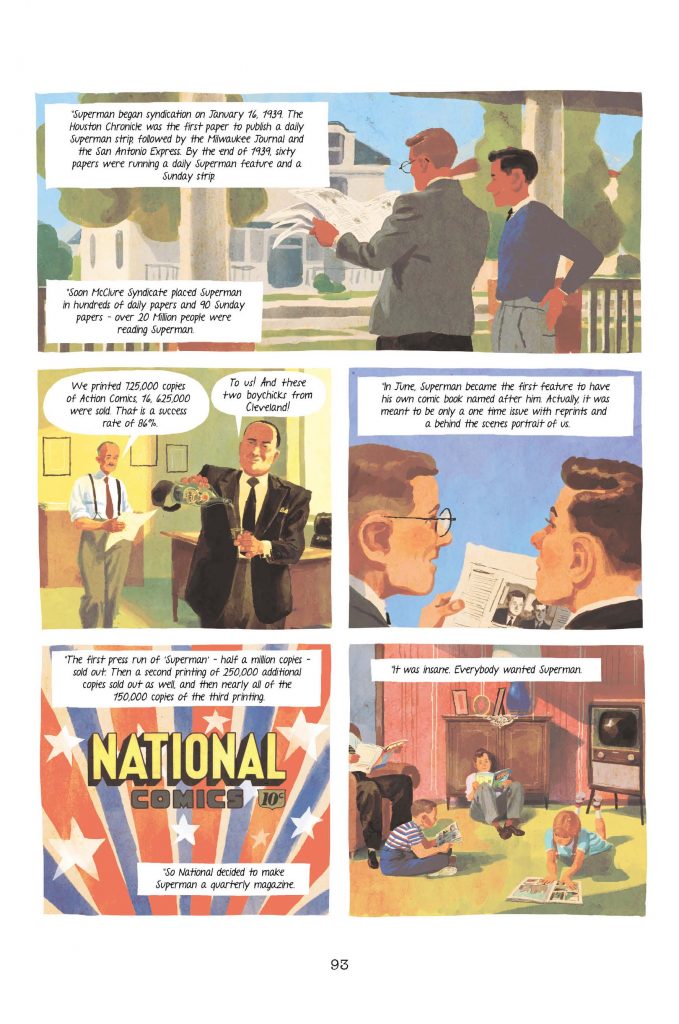 FS: While the story of the creation of Superman is a fascinating one, what drew you both to the subject such that you wanted to craft a whole graphic novel around Joe Shuster?

JV: The initial plan was to write a graphic novel about the pioneer generation of American comics, think of a non-fiction Adventures of Kavalier and Clay in comic book form. But then I got access to a collection of letters written by Joe Shuster and knew I wanted to tell the story from his perspective. He was for most of his life in the Jerry Siegel’s shadow, but in many ways, his life was more tragic, and making him the center of the narrative is giving him posthumously a voice. 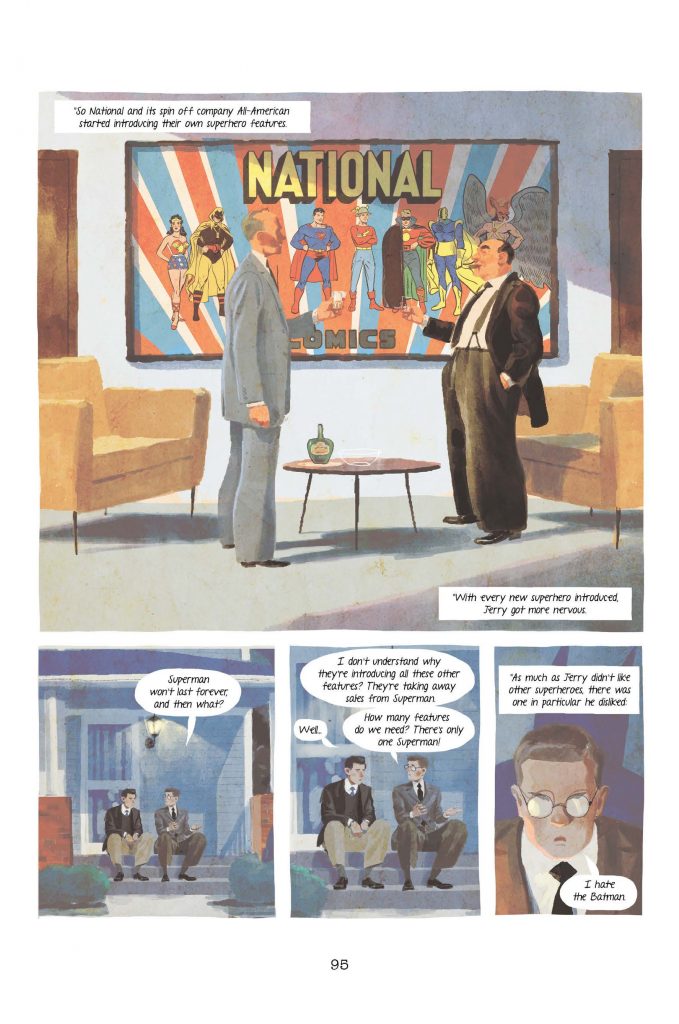 FS: What was the research process like in trying to get to who Joe Shuster was and the nature of the world he lived in?

JV: I benefited from the groundbreaking research and excellent literature already available on the subject. There are really great books published on comic book history and we list some of them at the end of our book. There are also nearly 20 pages of annotations, citing the material used. Nearly every page is based on something I read, saw, or listened to. For instance, the Cleveland Public Library has scanned school newspapers in its collection, including the high school newspapers where Shuster published his first cartoons. These papers don’t only show us his early artwork, which Thomas Campi, the artist working on the book, could re-draw, but also have articles that give you a sense of the whole surrounding. I’ve spent nearly two years assembling material before trying to put everything into a coherent and interesting narrative. 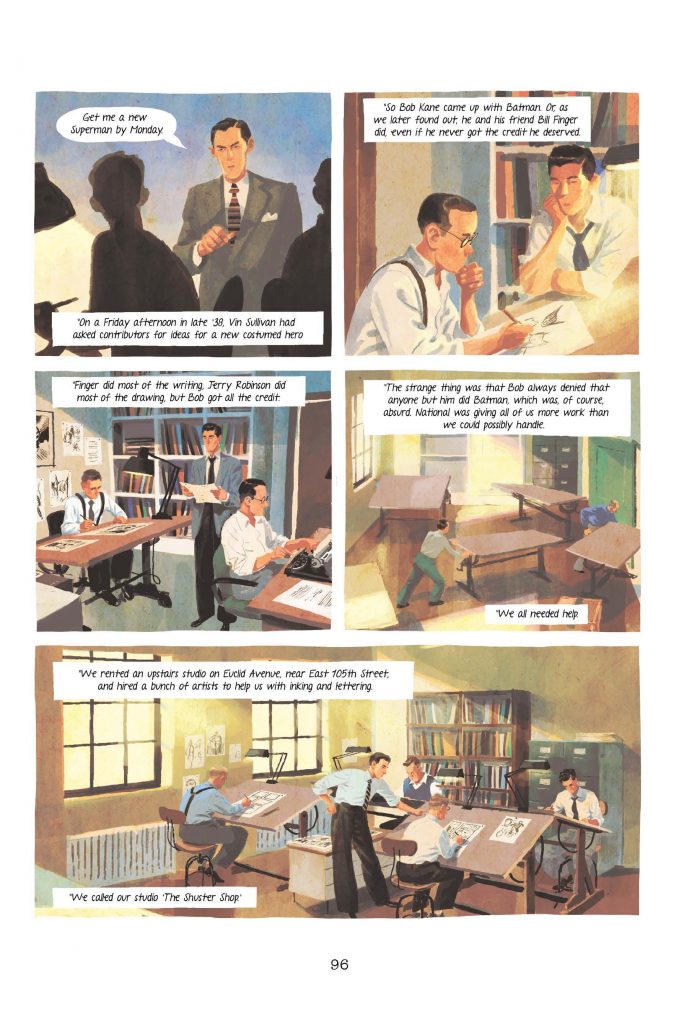 FS: Following up on that, was there anything that surprised you through the course of your research?

JV: I think the biggest surprise to me was that the story was not as black-and-white as often assumed. First of all, Siegel and Shuster both worked in the industry before the first Superman comic was published, so cashing in the check that would pass the rights to their creation to the publisher was standard procedure. Then, both lived very well, had good salaries and even a little celebrity status in the 1940s, even if early on they saw that the publisher was making tons of money with their creation. Superhero comics normally have good and bad guys, but this graphic novel is like real life and shows a more complex narrative. 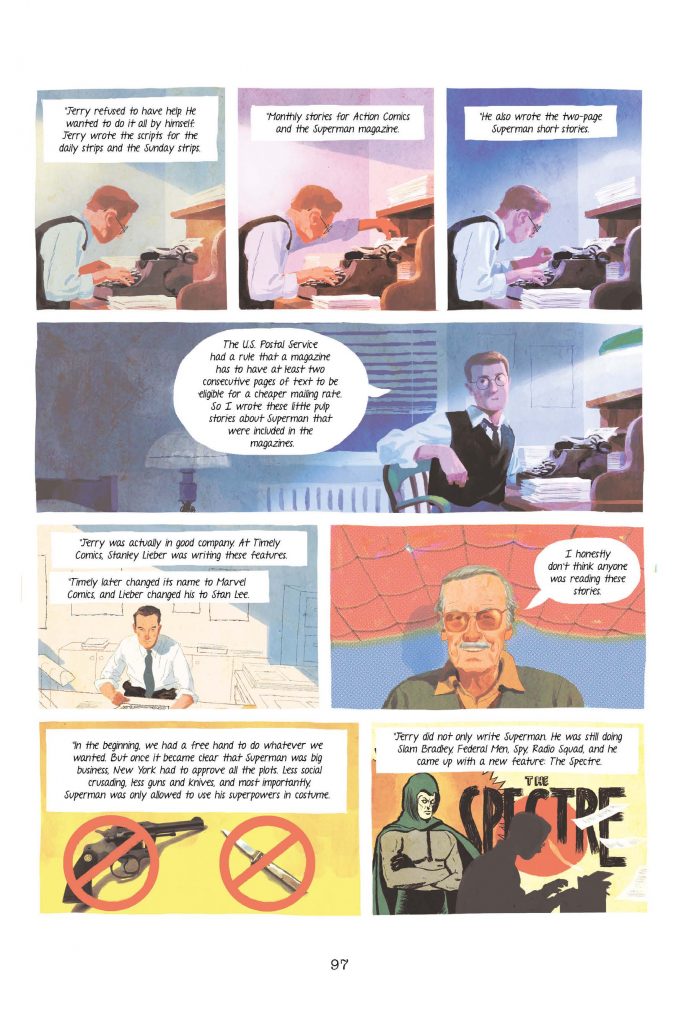 FS: The look of the book is gripping. How did you decide on what you wanted the visual feel of the novel to be?

JV: Thomas and I are both fans of the TV show Mad Men and in a way, the book is the “Mad Men of Comics.” The visual feeling is more Edward Hopper, American realism, which gives it a nostalgic feeling and is at the same time a beautiful homage to the zeitgeist.

FS: The book is inspirational at times, melancholic at others, but never felt like it pulled punches or softened its landings. Did you go through any emotional responses while creating your tale?

JV: Every book I write is a very emotional experience. Especially reading for the first time Joe Shuster’s letters from the late 1960s, struggling to pay medical bills and fearing to be evicted while losing his eyesight, was something I won’t forget. They were heartbreaking. The book is really a rollercoaster, at times funny, then sad, hopeful, and has kind of a happy ending, and writing it has been the same way. 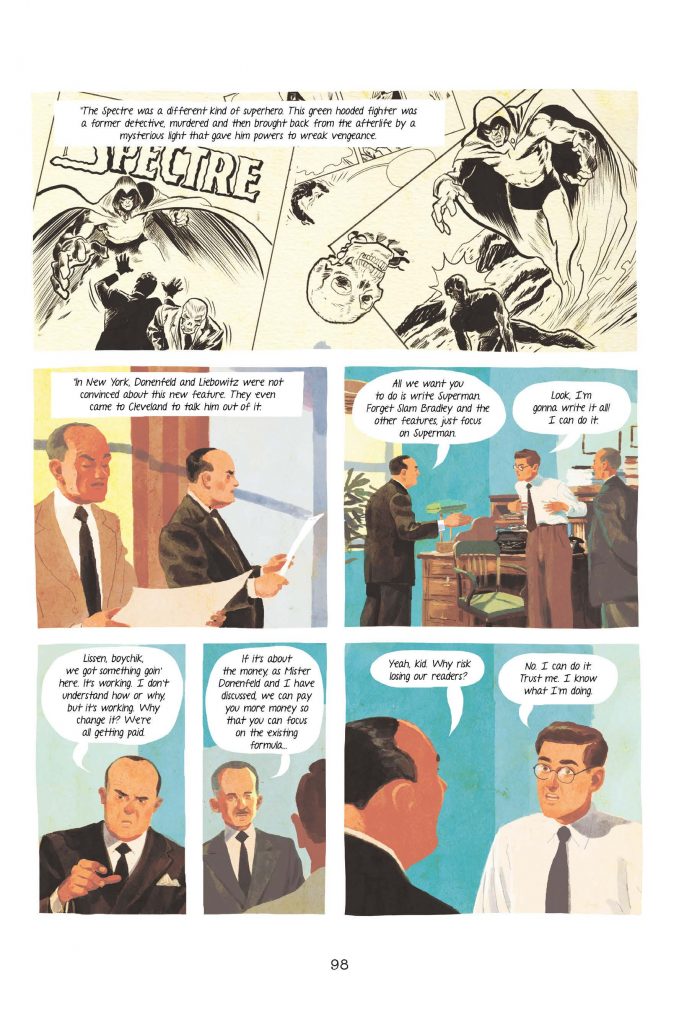 FS: You end the story when the duo is credited for their creation of Superman. Is there anything before or after that you would have wanted to include, but couldn’t for time or space concerns?

JV: Writing is like making a sculpture out of stone. You have a huge rock of information and then you slowly chip away things to make it coherent. I believe that the way the story is told is the best possible way.

FS: The story is an inspirational one and you recount it beautifully. Beyond being entertained, are there any takeaways you would like readers to have upon finishing the graphic novel?

JV: During my own research, I visited my parents and looked at my own Superman collection, which has some books from the late 1960s and mid-1970s. It was fascinating to see that at one point Siegel and Shuster’s names appear as the creators. It’s something I never paid attention to as a kid reading these comics. I hope readers show more appreciation for creators after reading our book.

The Joe Shuster Story: The Artist Behind Superman, written by Julian Voloj with Thomas Campi on art, is on sale now from Papercutz’s Super Genius imprint.

Everyone knows Superman, but not everyone knows the story of two youngsters from Cleveland who created Superman. Based on archival material and original sources, “Truth, Justice, and the American Way: The Joe Shuster Story” tells the story of the friendship between writer Jerry Siegel and illustrator Joe Shuster, and puts it into the wider context of the American comicbook industry.