Please allow me to introduce myself. This is Troy Brownfield, and I’ve written about action figures and collectibles for a long time in various places, notably at Newsarama and in the pages of Newtype USA magazine, among others. After a bit of a break from that, I’m getting back into the land of that kind of coverage with the fine folks of FreakSugar. First up is one of several Marvel Legends assortments that has been and will be landing this year. That, of course, is the Odin wave.

A Little Background: If you’re interested in Marvel figures at all, then you’re probably already very familiar with Marvel Legends. The 6” figure line launched in 2002 from Toy Biz; this came after the hugely successful run of Marvel product that Toy Biz put out in the ‘90s, based largely on the enormously popular Spider-Man and X-Men animated series that ran on Fox (along with sublines based on other programs and characters, including Iron Man, Fantastic Four, Avengers, and GhostRider). Marvel Legends itself was a spin-off of the Spider-Man Classics line, itself a more upscale collectible expression with greater detail and previously unseen levels of articulation. Beginning in 2007, Hasbro became the holder of the Marvel license, and the Marvel Legends line transitioned to its new home. Since then, Hasbro has continually tried new things with the brand, including refining the packaging, offering boxed sets as conventional and retail exclusives, and even spinning off a very successful 4” line (Marvel Universe). The latest iterations, dubbed Marvel Legends Infinite Series on the packaging, continue to offer detailed sculpts and interesting character selection. So then . . . the Allfather/Odin wave.

Deja Vu Of The Sentry’s Death

Mohawked helmets are the best helmets.

Odin Wave Overview: This is technically the first of six waves that be released this year (for the record, there are two Spider-Man, one Ant-Man, and three Avengers). This Avengers-focused wave includes a couple of classic takes, a couple of newer interpretations of older characters, and two new arrivals in Legends format. Let’s take the big guy first.

Odin the Allfather: The Father of Thor is pretty impressive. This is the first time that Odin has appeared in the line; in fact, it’s surprising how FEW Marvel Odin figures there are (Super Hero Squad, Thor movie and . . . is that it?). This is a sharp Build-A-Figure, with great detail and Odin’s signature spear. A bonus of the line is that there are also extra BAF pieces that allow you to turn Odin into King Thor (hence the Allfather tag on the wave rather than straight-up Odin). That’s a fine addition for the most hardcore of Thor fans, but those seeking to add Odin to their Marvel Universe should be happy with the quality of this particular BAF. As I look at the other figures in the wave, I’ll note which comes with which pieces of the Allfather. 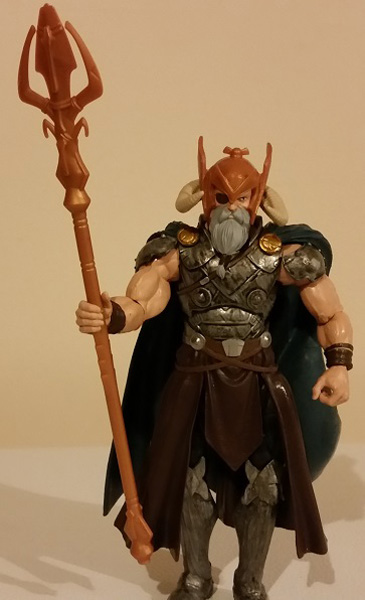 Captain Marvel (includes King Thor head, cape, and axe): Carol Danvers is no stranger to the Marvel Legends, having previously appeared as a single figure and in the Target Exclusive boxed set with Captain America and Radioactive Man last winter. However, this is our first look at Carol in the Captain Marvel costume, and Hasbro did not disappoint. The Captain comes with two heads; one is helmeted, the other helmet-less. I found the sculpting to be solid; additionally, the fact that the sash is its own sculpted piece attached rather than a paint-op ups the quality considerably. I also appreciate the inclusion of the energy burst accessory; it fits over the character’s hand. Figures with heeled boots are occasionally a chore to stand, but I found Captain Marvel to be easy to pose in balanced, slightly forward position. This is the right time for this figure, considering the amount of press that the book and character get as we continue the march toward the Captain Marvel film. 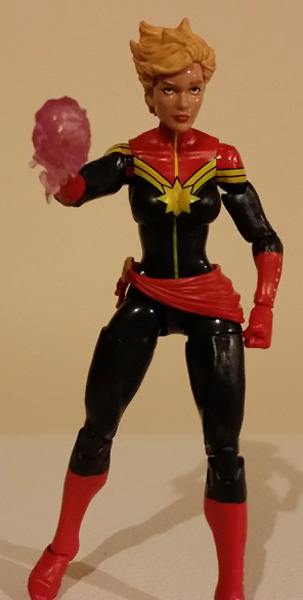 Scarlet Witch (includes Odin head, cape and staff): The other lady in the wave is the second Marvel Legends take on a “classic” Scarlet Witch (the previously having occurred in the Legendary Riders wave in 2005). This version is a clear improvement on the other. In addition to the much-improved face sculpt (this one has a hint of young Lauren Bacall in her appearance), the body overall is stronger and stands more readily. The cape is heavy, but acts as a balancing agent for standing. Wanda’s accessories include two snap-on “hexes” to simulate her magic use (the same accessories appear to be included in the Doctor Strange that’s due in the Hulkbuster wave). Clearly present in this wave to be timed alongside the release of Age of Ultron, Scarlet Witch is a worthwhile upgrade to a pre-existing figure. 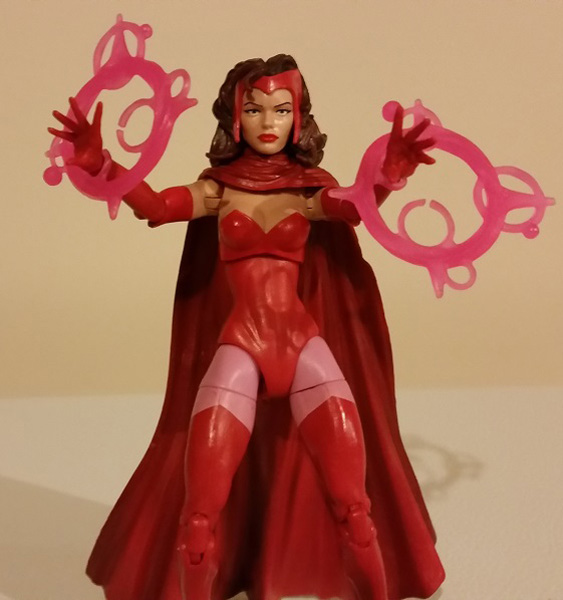 Machine Man (includes “King Thor” arms): Machine Man was the one of three figures in this assortment that I was most excited to see as a fan (along with Odin and Carol). His inclusion is one of the best things about Marvel Legends, which is a commitment to seeing as much of the Marvel Universe on your shelf as possible. 2015 looks to be an exemplary year for that way of thinking, considering that we’re due Misty Knight, White Tiger, Thundra, and a number of long-standing villains (Bulldozer, Tiger Shark, etc.) that have been previously unavailable as Legends. The most striking thing about Machine Man is the paint op; the metallic sheen is perfect, really. This can be a hard thing to pull off, but the quality of the op is obvious. The figure looks great, but is instantly separated from any other figures that you may display next to it (I would hope that, if ML includes Jocasta down the line, she gets the same treatment). Additionally, the figure comes equipped with two interchangeable extendable arms, nicely replicating one of the character’s signature abilities. I’m also glad that they opted for the classic appearance; while the Marvel Zombie “Aaron Stack” look is cool, this is the figure I preferred to have. Excellent job. 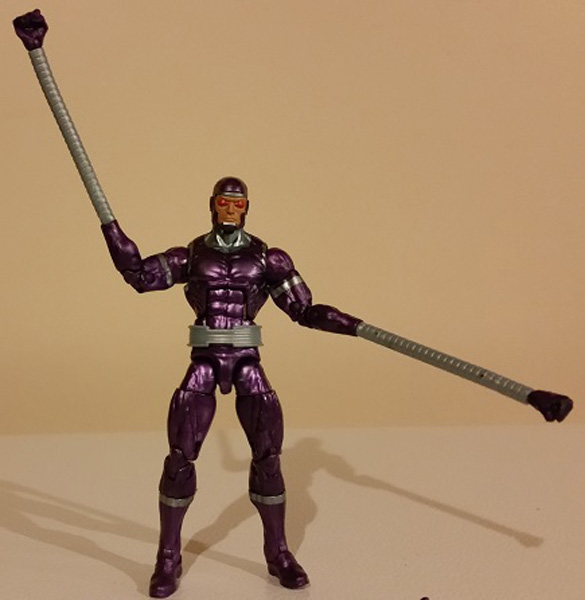 Marvel NOW! Thor (includes Allfather right leg): You may already have a Thor. You may already have a couple of Thors, in which case, your mileage may vary. However, this is a very fine piece of work, and those collectors that like all the various costume iterations will definitely enjoy this fairly recent take on the Odinson. Part of the cool factor here is the sheer size and weight; this is a solid figure, heavy in the hand. Standing next to other figures, it has presence, and that’s a hard thing to capture in plastic. The accessories include Mjolnir (arguably one of the two most essential Marvel accessories, like Cap’s shield) and a broadsword that bears some resemblance to the Odinsword of the comics. While I wouldn’t have ranked this as the most “necessary” figure on the line outside of the inclusion of the right leg, I’d have to say that I was impressed with the both the quality of the sculpt and the look for display. 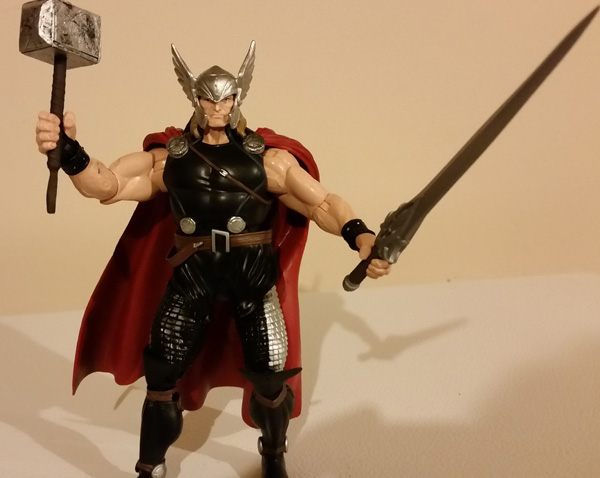 Hawkeye (includes Allfather torso): Kids, this is just a nice figure. Yeah, you may have a Legendary Riders Hawkeye or a more modern Hawkeye from the Rocket Raccoon assortment (and I envy you if you have that one, because I missed it), but this classic take just. looks. good. The take on the tunic and the fully covered left arm puts me in mind of West Coast Avengers, for example (speaking of which, where’s Mockingbird? Let’s see her soon!). Clearly, he comes with the crucial Allfather torso, but I could see casual collectors wanting this figure in order to just have a solid interpretation of an important character. 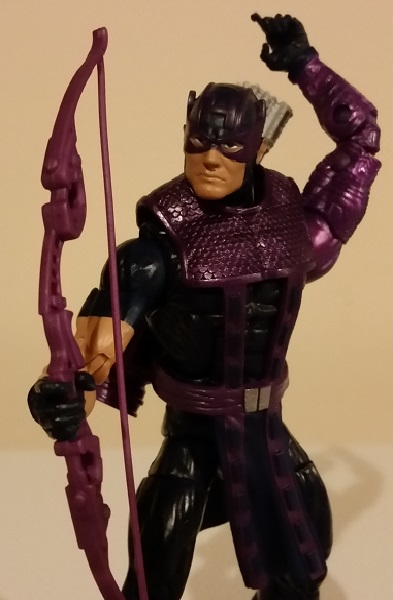 Iron Fist (includes Allfather left leg): I really like the white Iron Fist costume. It’s striking, it’s modern, and it has managed to shed the collar (which I love in ‘70s nostalgia mode, but still). Without a doubt, the best feature of this Iron Fist is the set of several swappable hands. This is perfect for this character, allowing Fist to strike poses for punches, chops, and focus, depending. I thought this was a great inclusion, and it’s certainly thoughtful on the part of the company when it comes to anticipating the desire of the customer. I’ve seen figures in different lines from different companies over time sandbagged by awkward poses or accessories. This is about the best take on a value-add for Iron Fist that you could find. It’s a great take on a beloved character, and appropriately timed, considering that Fist will be kicking butt across Netflix next year. 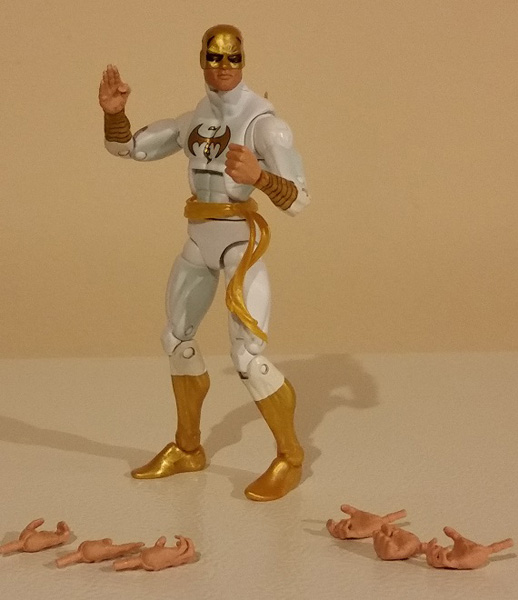 Sentry (includes Allfather arms): I’ll admit it; I am not a huge Sentry fan. Still, it’s a well-made figure (as are they all). It’s also a real improvement over the earlier Sentry from the Giant-Man wave of several years ago. That one came in two versions (clean-shaven with short hair vs. bearded with longer hair), but this one strikes me as more of the Dark Avengers/Siege appearance of the character, and as such felt worthy of inclusion on the villain shelf. It’s also obviously taller than the previous version, carrying some of that weight that I saw as a positive in Thor. Eagle-eyed observers might recall that this figure was a holdover from the Hit Monkey wave (it was supposed to be an alternate with Hyperion), so I’m sure that some fans will be happy to see the figure released here. 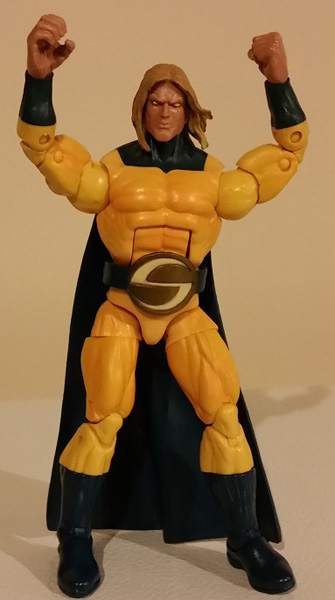 Summary: This is a good solid wave right here. While I’ll admit to being a bit more partial to the Thanos wave (Hellcat! And review coming soon . . .), this set has a lot of great things to offer. Taken together, it’s a really strong assortment, filled with well-crafted figures and a couple of very welcome character choices. With the assortments seeming to hew closely to Marvel’s cinematic priorities, I’m hopeful that will continue to allow Hasbro to give us combinations of previously unmade figures (like Machine Man) alongside quality updates (like Scarlet Witch) and fan-favorites (like Captain Marvel). It’s got me excited for the future of the line, and I pretty sure that I’m not alone.