The first issue of artist and writer Phil Jimenez’s Superwoman established that the New 52 versions of Lana Lang and Lois Lane—both close friends to Superman—were affected by Clark’s death, and not just emotionally. After the New 52 Man of Steel exploded in front of their ideas, his passing somehow imbued the duo with superpowers. They decided to work together, spurred on by Superman’s example to use their newfound abilities for good.

Until the end of the issue, that is. Lois seemingly died at the end of issue 1, murdered by a female version of Bizarro. Superwoman #2—on sale now—deals with how Lana is affected by Lois’ death and who has been pulling the strings of the Bizaress Army.

Mr. Jimenez spoke with me recently about the genesis behind Superwoman, Lana’s state of mind in issue 2, and how the villain of the book is the perfect foil for Lana Lang. 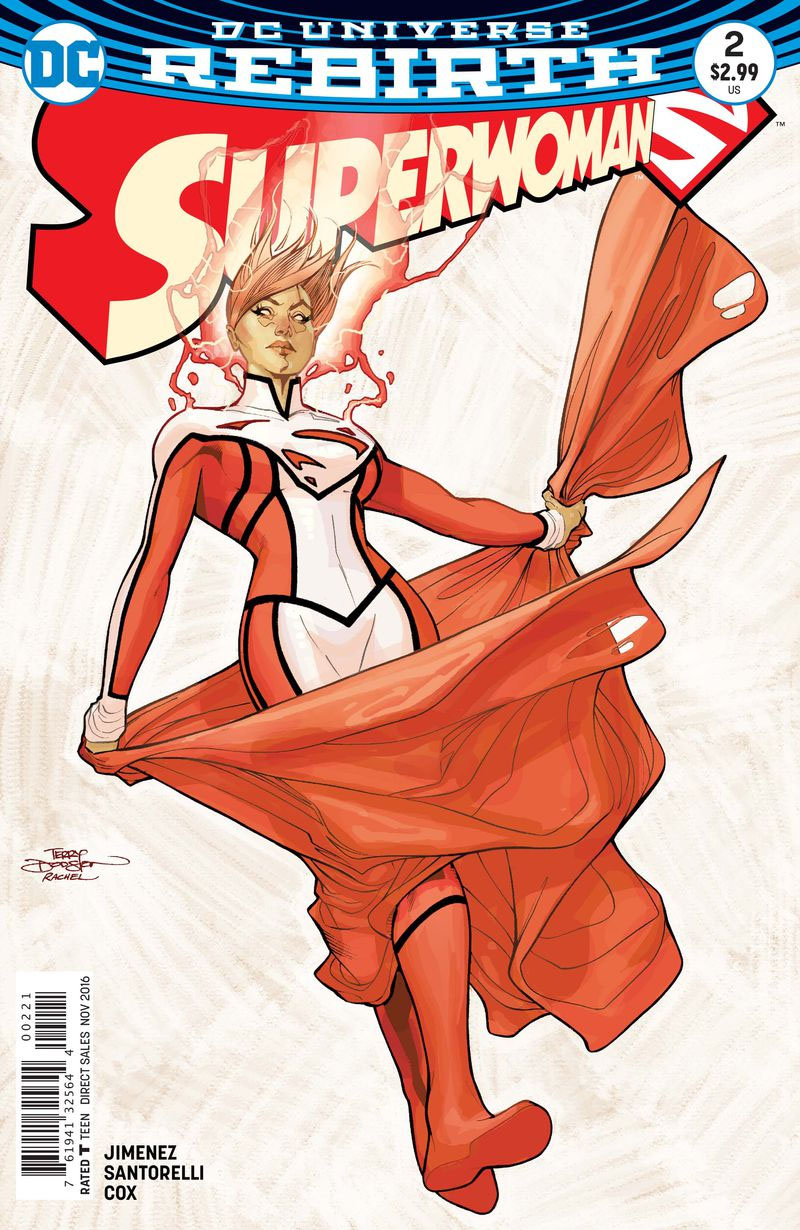 FreakSugar: Before we get into issue 2, I was wondering if you could talk about how you became involved with and the genesis behind Superwoman.

Phil Jimenez: The short story is that I had been talking to Dan Didio about a year ago—September or October of 2015—about coming back to do some work with DC Comics. It was decided that I would draw Superman and Bryan Hitch would write it. I was so excited because I know how much Bryan loves Superman. We plotted it for a month, month-and-a-half, until DC decided that it was going to change its publishing schedule, consolidate the line, and publish the book biweekly, at which point Bryan and I had to drop out.

I still wanted to do work for DC so in December they pitched me Superwoman. It was sort of a shock because they also wanted me to write and draw it. I hadn’t done an ongoing project like that in a long time. They seemed to have faith in me. I worked with Geoff Johns to figure out what this would be and what its characters would be and I started after “Rebirth” digging into it, writing and drawing it. And it’s actually been a really great experience, more than I expected, considering how odd it actually is.

FS: It seems really clear from your writing that you’re having a lot of fun. One thing I particularly appreciated were the throwbacks to Superman’s long history: from a cameo by Steel to a nod to the first Superman film to Lana’s iteration of Clark’s powers from his electric Superman days. It seems like you’re making a very concerted effort to appeal to older readers and newer fans.

PJ: Aside from it being an assignment for “Rebirth,” I firmly believe that older readers should get a payout for their investment of their time and money and emotion. I am not one of those people who thinks the baby should be thrown out with the bathwater. At the same time, the hope is to modernize older material. Hopefully, that will ring to younger readers while staying true to the source material itself.

The thing I’m trying to do with Superwoman is that here’s this quirky little side book that I can still insert nods to the older fans. I can insert things like Lois Lane saving a plane with a passenger saying, “You’ve got me? Who’s got you?!” [a callback to the first Superman film]. I wanted readers to know that I was aware of that stuff and that it matters. Moments like that resonate throughout the decades among fans.

Superman Red and Superman Blue is very much an homage to the Electric Supermen. Lana Lang was an engineer. It seemed very obvious that she would use that knowledge in using her powers. I consulted with science friends of mine as to what those ways she’d use her powers would be. What was great is that DC seemed to be really game for it.

I got to bring back Steel and Natasha, supporting characters I really love. I got to play with Lex Luthor and his history and his connection to Metropolis. One of the things DC asked me to do is to flesh out Metropolis once again and make it a city of real people so that the actions of Superman would matter. I think they were starting to do that before “Rebirth,” but they wanted me to continue to do that by bringing back some older characters as well as introducing some new ones. 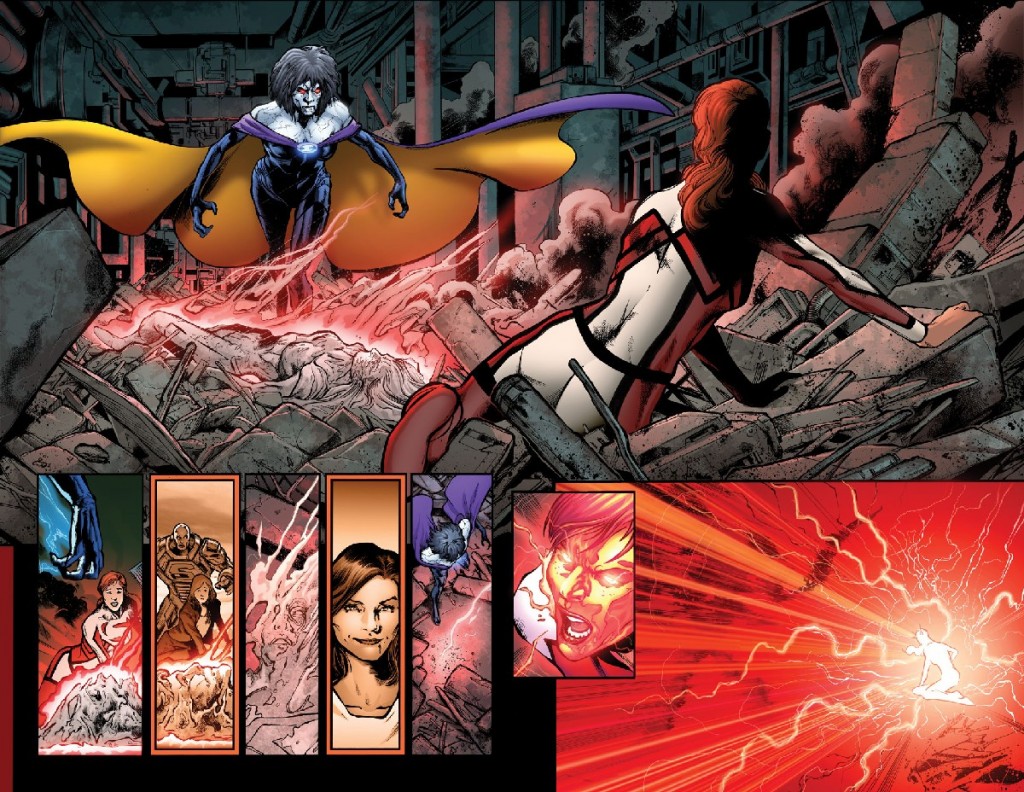 FS: With Lois’ death at the end of issue 1, what can you tell us about Lana’s state of mind at the beginning of issue 2?

PJ: I personally describe it as shock and disbelief. She has just witnessed her work partner—die, explode, we’re not sure what—in the same way that her best friend [the New 52 Superman] did six weeks before. The way I imagine it is that it’s shock, it’s panic, it’s disbelief, it’s a lot of things. She’s actually quite agitated throughout much of issue 2. She’s dealing with villains and the blackout. Steel wants her to lay low and all she wants to do is get out there.

How I read the New 52 Lana is the way Greg Pak wrote her: a very forward-thinking, action-driven character on the move. I think because of Lois’ death, all she wants to do is move because otherwise she’ll have to think about this event in her life. Another person in her life has died, two people she knows. Two Supers have died before her eyes. Could she be next? That’s what she’s thinking. “Can I recover from this? Could I be next? Could what happened to them happen to me?”

FS: So much of the issue deals with human experimentation on villains such as Atomic Skull, and I appreciated how you humanized them and made them more sympathetic.

PJ: Atomic Skull is a particular favorite of mine, maybe because he’s so visual. A lot of folks at DC aren’t fond of him, so I made it my mission to find a way to make him work. [laughs] The New 52 version is an odd duck. Since my book is odd, I wanted to play with him.

I also wanted to address the prison-industrial complex. I wanted to use Steel because, as we’ll learn in issue 3, he’s brother is in prison. I wanted to present Steel and Natasha as characters who were no longer interested in sustaining that prison-industrial complex. They want to stop experimentation on prisoners. I will say that the Atomic Skull story does not end in issue 3. I hope they like him. He’s a quack, that guy, but I hope readers like him. He actually solves some problems in the next issue. Lana isn’t happy about it. Atomic Skull has murdered people. So Steel offers up a way to explain Atomic Skull’s behavior and contextualizes it. There’s some nice dialogue between Atomic Skull and Lana and Steel about villainy and systemic violence against people and how easy it is to justify what we do to people we think are bad. But we’re no better than they are if we think that’s okay. 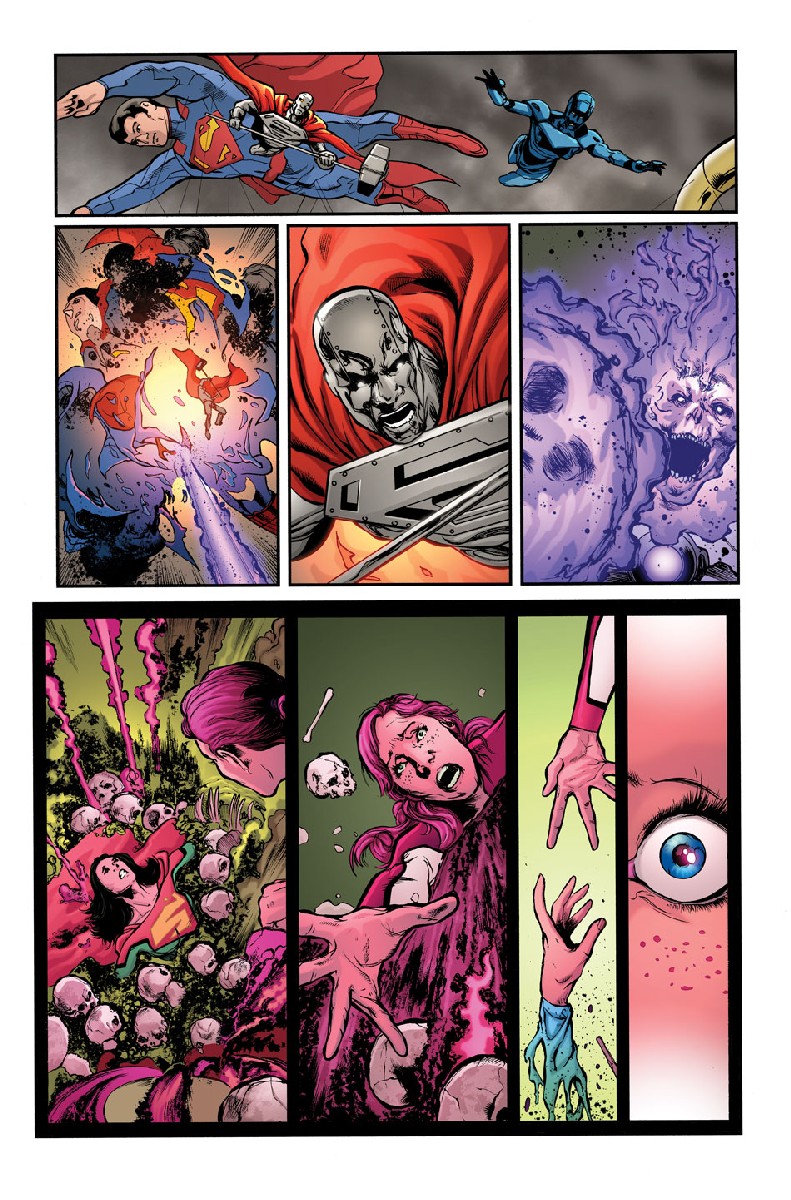 FS: We see Lena Luthor—Lex’s sister and the villain Ultra Woman—revealed as the villain at the end of issue 2. I thought she made perfect sense as a foil for a seemingly reformed Lex Luthor.

PJ: Part of it was finding a villain who was a perfect foil, not just for Lex Luthor, but for Superwoman. Both in terms of power and thematically, we’ll see that Lena is Lana’s opposite in many ways. They’re both women of science. They’ve been given power by the men in their lives unexpectedly—and they’re both quite angry about it. We’ll also learn that their powers are doing them damage. The more powerful they become, it affects their bodies and mortality.

That was my mission statement, to create a villain worthy of Lana. Also, I wanted to have a villain that had an emotional resonance to the core Superman group. With Lex Luthor a Superman in the world now, it made sense to me to have him connected to Lana’s villain as well. I’ve been talking to [Superman writer and artist] Dan Jurgens a lot, who’s been giving me inspiration for Lex’s history. I’ve been able to create a whole history between Lena and Lex that feeds into Lena’s motivation and anger.

I think we’ve come up with one of the first female villains in a very long time who isn’t motivated by wanting to have sex with the lead or have their baby. Lena is motivated by some of the same things Lex is motivated by: power, ambition, ego. She’s smarter than everyone in the room. My hope is that people connect with her motivation, see what she’s capable of, and see that she’s her brother’s equal and more.

Superwoman #2, written and drawn by Phil Jimenez, is on sale now from DC Comics.

“WHO IS SUPERWOMAN?” part 2! The battle of Metropolis Harbor rages on and the casualties are mounting! To save both herself and the city from the ultra-powered Bizarress duo, Superwoman must turn to John Henry Irons—a.k.a. Steel—for help! But there is a larger villainous force at work behind the scenes, and you won’t believe who it is! Buckle up for the shocking true identity of Ultra Woman!