Just in time for the 60th anniversary of the first appearance of our favorite wall-crawling superhero, The Amazing Spider-Man #900—out this week from Marvel Comics—takes the time to tell tales, present and past, of Peter Parker and his alter ego, which shed light on his personality and his long-storied history. One such yarn is “Better Late than Never,” written by Daniel Kibblesmith, with David Lopez on art, colored by Nathan Fairbairn, and lettered by Joe Caramagna. One of Peter’s chief motivators in 60 years of comics is guilt, guilt for matters world-crushing and mundane alike.

One of those Sisyphean guilt boulders he bears is overdue library books, but, lucky for Pete, the New York Public Library has announced a late-fee amnesty. One less thing for Spidey to worry about and a chance to unload some weight off his shoulders. Unfortunately for him, however, the books he returns are in less-than-pristine shape, leading to the ol’ Parker luck striking again.

And what are some of those books, pray tell? All (well, most) of them are callbacks to different points or aspects of Spider-Man’s history, with a few winks and in-jokes along the way. For example: 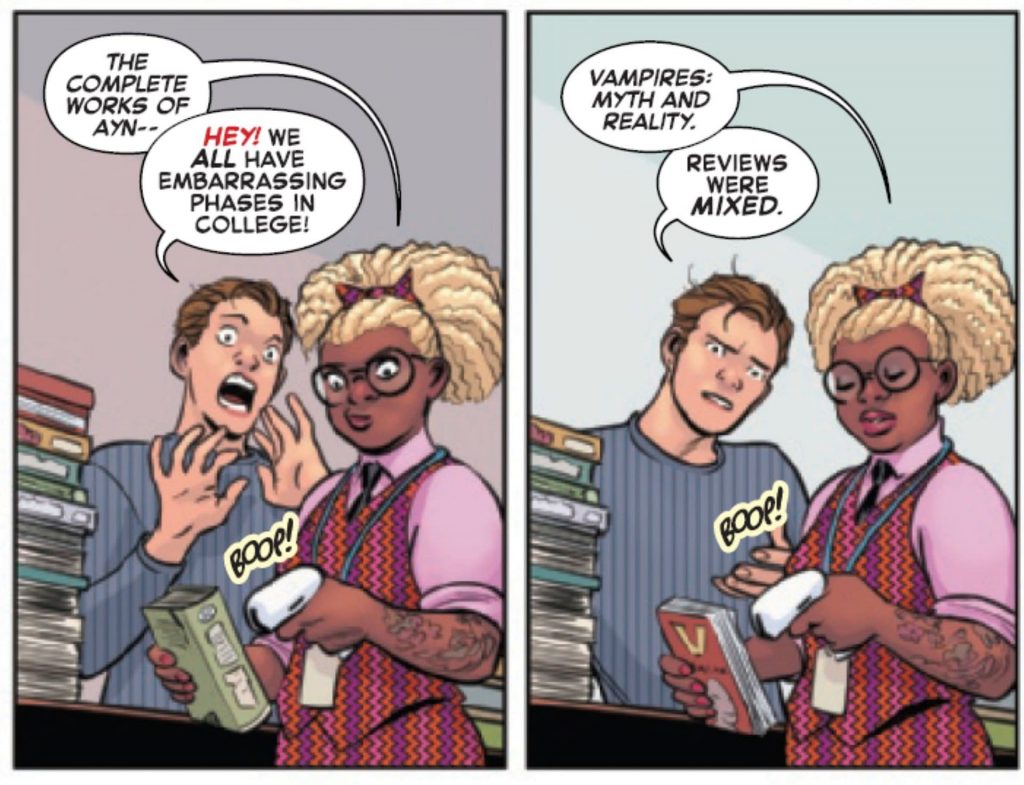 Peter reading Ayn Rand‘s books has been a running joke in the comics for quite some time and is always a welcome note of embarrassment, watching him squirm. (Hey, who hasn’t gone through a phase that they haven’t regretted?) 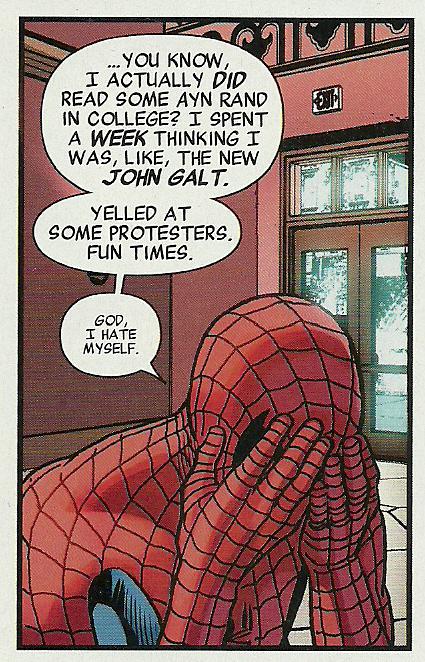 The second panel is both a reference to Spider-Man’s sometimes-foe, the vampiric Dr. Michael Morbius, as well as a jab at the not-so-well-reviewed Sony film Morbius starring Jared Leto. 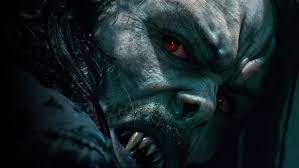 Villains such as Doctor Octopus and the Kingpin also get their nods, as well as the occasions that Peter grew additional arms, as alluded to in the “A Farewell to Arms” panel: 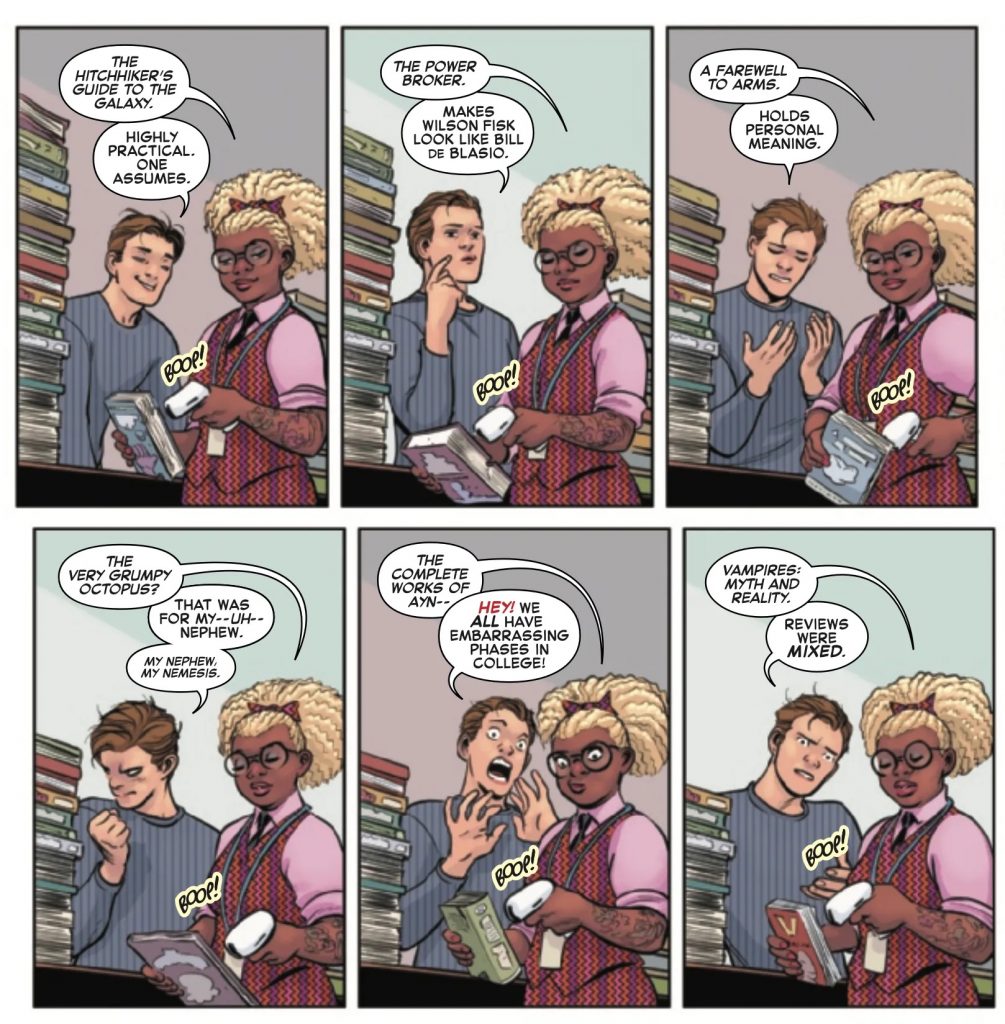 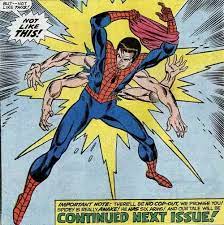 And then there’s a reference to the (arguably best forgotten) “One More Day” story arc in which Peter and then-wife Mary Jane give up their marriage to the demon Mephisto in exchange for saving the life of Peter’s Aunt May:

The reference to Doctor Faustus in the third panel connects to “One More Day” in that both circle around deals with a demon that are quite ill-advised. That one panel, by the way, makes the whole “One More Day” story almost palatable, in this writer’s humble opinion. Almost. 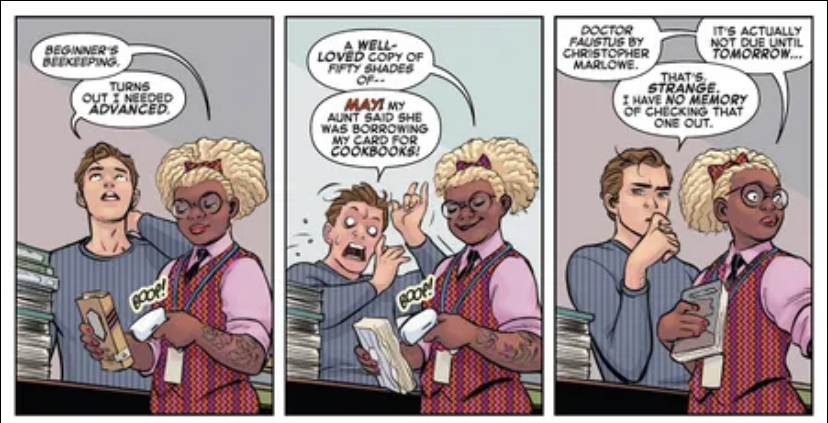 Doing a five-page speed run through Spider-Man’s sweeping history might seem like an impossible task, but Kibblesmith, Lopez, Fairbairn, and Caramagna are all consummate professionals who always show up with their A-game, bringing humor and heft to the highs and lows of the web-slinging of superhero. It’s cute, fun, and charming, while still having something real to say about the continuing journey of Peter Parker.

And hey, despite a not-so-dignified ending (no spoilers), Peter’s charm still works out in the end in a way, so the ol’ Parker luck can’t be all bad.

The Amazing Spider-Man #900 is on sale now from Marvel Comics.